Poland have strike power Martin O'Neill can only dream of 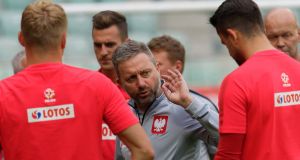 Polish head coach Jerzy Brzeczek talks to his players at a training session in Wroclaw, Poland before the international friendly against the Republic of Ireland. Photograph: Jan Karwowski/EPA

If Martin O’Neill feels slightly aggrieved, and it is seems pretty safe to say he does right now, over the speed at which people have started to speculate about his position with the Ireland team, he might spare a thought for Adam Nawalka, the man who was in charge of Poland when these two sides last met during the qualifying competition for Euro2016.

The then 56-year-old had taken on the job at the end of the previous World Cup campaign which had finished with Poland fourth in a group won by England. They had ended up two points adrift of Montenegro who they had failed to beat either home or away.

Nawalka got the team to France after they finished second by a point in their qualifying to Germany, the World champions, who they beat 2-0 early in the campaign. Ireland were third, a further three points back. At the tournament itself, the Poles reached the quarter-finals where they went out on penalties not to the team that many expected would win the tournament, France, but the one that actually did, Portugal.

They followed that up with a successful World Cup campaign which ended with Poland sitting five points clear of Denmark in Group E’s top spot. There was a single significant setback along the way, a four goal defeat by the Danes, as it happens, but it made no material difference to his team’s progress and this time Montenegro were beaten twice.

Expectations were high as Poland went to Russia ranked number eight in the world but losing their opening two group games changed all of that and it quickly became clear that Nawalka’s contract would not be renewed.

The speculation here was that having appointed one local coach who had played for his country but never really set the world on fire at club level, the federation would look overseas for his replacement, for a foreigner with a track record of high-level success.

Instead, they turned to Jerzy Brzeczek, whose most successful season in management was the one that ended just before the summer when he guided Wisla Plock to fifth place in the Polish top flight.

He is a former captain of the national team who represented his country more than 40 times, though, a member of the side that won Olympic silver in 1992 and uncle of the of the country’s stand out stars, the Wolfsburg midfielder Jakub Blaszczykowski, who he is credited with coaxing back to the game as a youngster after the murder of his mother by his father had turned his world upside down.

Brzeczek looks like a gamble but with the team needing to win in Kazan, the utter lack of ambition displayed in Poland’s second group game against Colombia apparently made any sort of change seem attractive.

The new man must now lift a team his predecessor probably thought he had done rather well with considering the mixed collection of talent available to him. He was, he might contend, the victim of the expectations he helped to generate but he is gone nevertheless.

The new man has had little option but to make his mark. Retirements after Russia has meant a new-look defence with the likes of Arkadiusz Reca and Bartosz Bereszynski coming into the side for the drawn Nations League game against Italy the other night.

Damian Szymanski, Adam Dzwigala and Rafal Pietrzak, all of whom played under the manager at club level at some stage have been brought in too. They might not possess the quality of the squad’s more celebrated stars but they are trusted by a manager who needs players who know and understand what he wants from them.

Robert Lewandowski’s role, inevitably, remains unchanged. At 30, the Bayern Munich striker will almost certainly earn his 100th cap against Ireland in Wroclaw and he remains the team’s key source of goals, 16 of 28 in that last qualifying campaign and the assist for Piotr Zielinski the other night. His failure to get even one in Russia was blamed at least as much on Nawalka and the tactics employed as it was on him.

The striker’s club future is debated endlessly in these parts with speculation ongoing as to whether he is about to extend a contract with the Bundesliga champions that already runs until 2021 or begin the process of engineering a move to Spain with the media adamant that the Bernabeu will be where he spends the few years he has left in him as a really top-level striker.

In the meantime, there is already talk of a “next Lewandowski”; 23-year-old Krzysztof Piatek who only left Cracovia for Genoa in a €4 million deal during the summer but who is, after a flying start to his time in Serie A, already supposed to be attracting interest from Barcelona. He may make his international debut at some stage tonight.

At his press conference on Monday, Brzeczeck spoke of his delight at having three (for there is also Napoli’s Arkadiusz Milik) top-class strikers to compete or play with each other. O’Neill, who spoke of his having to soldier on for five years without even one, might be forgiven for thinking life can be a little unfair sometimes. Nawalka too.

1 College football turns blind eye to Covid-19 by risking players' health
2 Rugby impasse continues as no deal reached in fourth round of IRFU salary talks
3 The Best Of Times: Harrington stares down Garcia in epic Claret Jug battle at Carnoustie
4 Manu Tuilagi and Noel Reid leave Leicester after refusing pay cuts
5 Jürgen Klopp: Liverpool will channel spirit of the All Blacks
Real news has value SUBSCRIBE
Crossword Get access to over 6,000 interactive crosswords