Everton boss Silva has positive news on Coleman and McCarthy 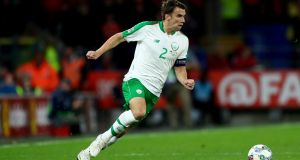 Everton manager Marco Silva believes Séamus Coleman will only be out for two weeks with a foot injury. Photograph: James Crombie/Inpho

Everton boss Marco Silva believes Séamus Coleman will be sidelined for just a couple of games by the foot injury he sustained while away on international duty, a timeline which would have him back comfortably in time for Ireland’s Nations League games against Denmark and Wales next month.

Coleman didn’t train with his club after returning from Poland and Silva said he would know more about the seriousness of his injury over the next 24 hours as the medical staff continue to assess the stress fracture but, he suggested, the Irishman would be out for “one or two weeks, perhaps”.

James McCarthy took part in the first team’s training session and now looks to be a matter of weeks away from a return to competitive action himself, something that raises the distinct possibility of him being called up by O’Neill too.

Silva did not give any sense about when he feels the 27-year-old might actually be match fit but he acknowledged that him getting back to this stage was “good news” after the seriousness of the injury he suffered back in January.

Alan Browne, who missed the game in Poland due to a calf injury, is to be assessed at Preston before their game against Reading but manager Alex Neil feels the midfielder may well be fit enough to feature and he may well make the bench.

Neil Warnock, meanwhile, has expressed confidence that Harry Arter’s international exile will be ended soon with the Cardiff City boss believing that Martin O’Neill and Roy Keane will move quickly to sort the situation out.

“I spoke to him early doors,” he said at a press conference to preview the club’s game against Chelsea. “My advice to him was: ‘Say nothing and get on with your football’.

“He loves his country, though, and wants to play for them again. We are talking about grown-up people and I am sure that will be sorted. You get rows like this a lot of the time and I think Martin will make sure that is sorted in the next few weeks.

“I am sure there are lessons to be learned by everybody. Martin doesn’t need me to tell him that Harry is a good player to have in the squad. I was quite pleased he didn’t go away from a selfish point of view but I am sure Roy will deal with the situation in the right way in the cold light of day.”

1 Billy Morton’s Santry Stadium a beacon for sporting endeavour
2 Séamus Power rockets into share of clubhouse lead in Detroit
3 Welcome to Iten in Kenya – home of champions and cheats
4 Red Bull poised to protest over Mercedes’ new steering system
5 Monica Seles: The warrior queen who could have been the best ever
Real news has value SUBSCRIBE
Crossword Get access to over 6,000 interactive crosswords