Limerick and Hickey can cast the heartbreak on to the bonfire

Towards the end, it seemed as if Limerick would falter, but all ghosts are laid to rest 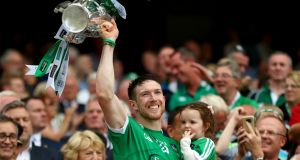 Did you think it? Actually, that’s the wrong question. Of course you thought it. The right question is, at what point did you think it? At what stage did the ghost of 1994 and Offaly and the whole bad, black lot of it flash before you as Limerick faltered down the stretch?

Was it in the 67th minute? That was when Joe Canning pointed a free to put up Galway’s fourth score on the bounce, in between which James Skehill made his point-blank save from Seamus Flanagan and had to go off in a daze. A nine-point lead down to five with three minutes plus a whole heap of injury-time still to play. Did you think it then?

Or was it when the two Galway goals went in early in those eight minutes of time added on? Whatever about the first from Conor Whelan, you surely thought it when Canning stuck his free in the top corner. As the umpire reached for the green flag, the clock said 74:12, meaning Galway were now only two down with at least four minutes to play. Did you think it then?

If you knew anything of their history, you had to. This is Limerick, after all. Unlimited heartbreak, and all that jazz. For any other county, losing an eight-point lead in injury-time of an All-Ireland final would have been brutal, a disaster, the worst of the worst. For Limerick, it would have been just another to throw on the pile.

Well, let the pile burn now. Build a bonfire up on a hill beside the M7 where Tipperary gives way to Limerick and let it all blaze to infinity. When Tom Condon burst from the cluster on the edge of the square with the last ball of 45 years of hurling safe in his hand, everything changed for good.

It all falls away when you win. That’s how it works. Every blown lead, every wasted generation, every mistake that was ever made, they’re all just smoke in the breeze above those bonfires now. It’s no time at all since the Limerick senior hurling team was a failed state, lost to rancour and recrimination, fielding a second team of whoever they could gather up to put on the jersey. That was only in 2010. Now look at them.

These days are the ones they mention in your obituary. They live after you, for good or for ill. John Kiely’s young team came to write their own story, to make their own history. But whether they liked it or not, whatever they did was going to create the context for the next Limerick team to play in an All-Ireland final after them. Just as they played this one in the context of those that had gone before.

One of the last Limerick players out of the tunnel before the game was Séamus Hickey. Most of the rest of the squad was already over at the bench, organising themselves for the team photo as he reached the centre of the pitch. But Hickey still took a second to plant his feet around the midfield hash mark and struck a 70-metre loosener over the bar. Every player does that - or tries to do that - but not every player comes with a personal history of a day like this to get out of his system.

No other member of the Limerick squad was a senior hurler in 2007 when they were last here for a final. None of them had the particular weight of baggage that comes with being waterboarded in full view of the nation before you’ve even left your teens.

Hickey was Kilkenny’d good and proper that day 11 years ago, taken for 1-5 by a ravenous Eddie Brennan. In Damien Lawlor’s terrific book Fields Of Fire, former Limerick player Donal O’Grady describes the scene after the final whistle. Hickey would go on to be crowned Young Hurler of the Year a couple of months later and nobody held the final against him. But everyone felt for him in that moment.

“After the game I went looking for Séamus,” O’Grady says. “One by one the Kilkenny lads came over and shook hands, so it took me a while to reach him. When I did see him – and I still have this vision in my head – there was Eddie with his hands wrapped around Séamus. He was more or less saying, ‘Sorry, lad, I had to do it.’”

Hickey was 19 years old that day, his future in front of him and a proper, good old-fashioned Limerick nightmare story already under his belt. After the streamers fell here on Sunday, he stood on the pitch cradling one of his twin sons, born only four months ago. He didn’t see a minute of action in the game, even though two of Limerick’s full-back line were replaced.

He saw Limerick win an All-Ireland, though. He saw the great comforting quilt of green ripple in the stands as Liam MacCarthy was raised and watched the pain and regret of four-and-a-half decades bounce off it into the endless sky above. Whatever else he is or becomes in life, he is an All-Ireland winner now.

They all are. And so, everything changes. The next time they find themselves in a final and they’re straining every muscle to hold on to a lead that is dwindling before their eyes, nobody will think of Offaly ’94. Nobody will brace themselves for the inevitability of the heartbreak that surely awaits. That’s all dead stuff now, a relic of the old ways.

With a single bound Limerick are free, history consigned to the books where it belongs. Whatever happens from here, that will take some beating as this team’s greatest achievement.