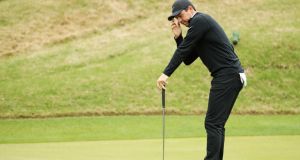 Rory McIlroy reacts after missing a birdie putt on the fourth hole during his match against Brian Harman at the WGC-Dell Match Play at Austin Country Club. Photograph: Gregory Shamus/Getty Images

Rory McIlroy cited fatigue associated with last weekend’s long-awaited success at the Arnold Palmer Invitational after his WGC Match Play involvement ended at the group stage. McIlroy’s 5&3 loss to the inspired Brian Harman was to prove the Northern Irishman’s last competitive outing until the Masters.

McIlroy had displayed traces of tiredness earlier in the week at Austin Country Club. Such a feeling was perhaps inevitable; the 28-year-old’s eye-catching triumph at Bay Hill on Sunday was his first in 18 months.

Still, a McIlroy win over Harman would have set up a playoff to reach the last 16. Harman’s lead of 3up at the turn was to prove insurmountable to McIlroy, who will head to Augusta next midweek to continue with Masters preparations.

“Especially after what happened last week, that takes it out of you being in contention, and all that mental energy,” McIlroy said. “So I wish I was hanging around for the weekend but I’ll rest up and get a little bit of work in before going to Augusta.

“Bay Hill was tiring. Going from winning on Sunday to travelling on Monday, getting an early practice on Tuesday to play on Wednesday, I didn’t have a lot of time to sort of recharge the batteries.

“I feel like my game is in good shape. I got off to a bit of a scrappy start today. I was two under on the back nine and trying to press but Brian just played really, really well.

“Obviously it’s a couple of days extra at home, that I wasn’t planning on. I’ll just chill out, rest up a little bit, recharge the batteries, get into the gym. Sort of have a good week training and a good practice week and just get myself ready for Augusta.”

McIlroy said he is “excited” about his latest tilt at completing a career Grand Slam. He and his caddie, Harry Diamond, will take to the Masters venue in the company of club members on Wednesday and Thursday.

Harman was understandably delighted with progress to the last 16, as heavily influenced by a superb putting display. The left-hander began tournament week as the world No 22. “Rory did not play his best golf today and I played extremely well,” Harman said. “I’m proud of the way I came out. Rory is an intimidating guy. He hits it a mile.”

The same applies to Bubba Watson, who has served notice of his Masters intentions by emerging from his group. Watson, a two-times Augusta winner, halved with Julian Suri on Friday having been two down with as many holes to play. Watson will face Harman on Saturday morning.

Phil Mickelson saw off Rafa Cabrera-Bello by a hole but, like McIlroy, was to suffer an early exit. Mickelson will play in next week’s Houston Open before chasing what would be a fourth Green Jacket.

“It feels good to come back and win these last two matches, even though I’m not advancing,” Mickelson said. “It goes back to the first day. You need to be ready to play from day one here, because the opportunity to be eliminated is there.

“I’m going to go up and see Augusta before and spend a couple of days there. And I’m looking forward to this next two weeks’ stretch. I would have liked to move on here, though.” – Guardian service