Irish golfer cards 75 but makes the cut at RBC Heritage 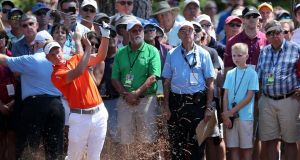 Luke Donald hits a shot on the ninth hole during the second round of the RBC Heritage at Harbour Town Golf Links in Hilton Head Island, South Carolina. Photograph: Tyler Lecka/Getty Images

Short game maestro Luke Donald and Canadian Graham DeLaet both holed-out on Friday on the way to grabbing a share of the lead on 10-under-par after two rounds of the RBC Heritage in South Carolina.

Donald found the hole on a short pitch shot, nipping the ball off the grass short of the green into a mound and making it pause after one big bounce before the ball trickled into the cup for birdie at the last to complete a four-under 67.

That tied the English former world number one with early starter DeLaet, who holed out a wedge shot from 109 yards to eagle the par-four ninth on his way to 67 on the Harbour Town layout.

European Ryder Cup stalwart Ian Poulter of England and 2012 US Open winner Webb Simpson were two shots back at eight-under 134, one stroke better than five players including first-round leader Bud Cauley, who followed an opening 63 with 72.

Ireland’s Shane Lowry also slipped down the leaderboard after carding a four-over 75 that included an outward nine of 40. A bogey on his final hole, the ninth, saw him make the cut right on the one under mark.

Former champion Graeme McDowell enjoyed a much better day, carding a three-under 68 to move to two under and make the weekend action.

Donald leaned heavily on his short game as he lost control off the tee, hitting just seven fairways yet grabbing a share of the lead in his quest to take the next step after four runner-up finishes here.

“It was a little bit of a struggle today, but my short game certainly bailed me out,” Donald, 39, told the Golf Channel.

“The greens are very small and you’re not going to hit all of them, so you need to be good around the greens. I proved that the last couple of holes.”

DeLaet, seeking his first PGA Tour victory after three second-place finishes and three thirds, vaulted up the leaderboard with a red-hot run around the turn.

“I had a nice little stretch in the middle of my round. I birdied eight, then there was the ninth. At 10, I missed an eight-footer for birdie, and I birdied 11 and 12,” he said.

DeLaet is one of eight players to have accumulated $10 million in earnings without a victory.

“Would be a little bit of coming back to what I really feel like I can play,” he said. “The last couple of years have been a struggle, but I still feel like I’ve got some good years in me. I need to try and finish it off this weekend.”