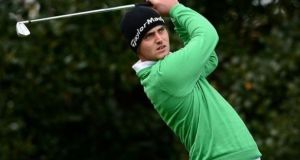 Naas’ Conor O’Rourke went back to basics and fired a five-under-par 66 to snatch a two-stroke lead after the first qualifying round of the West of Ireland Amateur Open at County Sligo.

The 25-year-old earned his international call-up last year when he won the prestigious St Andrews Links Trophy and the Nassau Invitational.

But after being named in the Great Britain and Ireland Walker Cup squad, he struggled for confidence earlier this year and only turned things around last week when he won the French International Foursomes alongside Irish Alps Tour professional Tommy O’Driscoll in Paris.

He then took that form to Rosses Point and fired seven birdies in an impressive opening effort, scorching to five under through eight holes and six under after 12 holes before overcoming short misses with the putter at 14th and 17th with a tap-in birdie at the last.

“I just tried to keep things very simple,” said O’Rourke, who went out in 31 on a day when just five players in the 134-strong field broke par.

“I have gone through a bit of a rough patch lately, overcomplicating things a bit, so I tried to get back to basics with my fundamentals because I got a bit loose with those things.”

He birdied the first and second, picked up another shot by chipping dead at the long fifth, then reduced the downwind seventh to a sand wedge and six-foot putt.

He picked up another shot at the eighth – the toughest hole on the course in yesterday’s 15mph west-north-west wind – after a superb 188-yard four-iron to 12 feet, then pitched dead at the 12th and holed the birdie putt to get to six-under par.

Three putts at the 14th and three more from just off the 17th saw him fall back to four-under-par before he hit a lob wedge to two feet to set up a closing birdie.

O’Rourke leads by two shots from Dundalk teenager Eoin Murphy, who had to play seven play-off holes in Wednesday’s 18-hole qualifier just to get into the field.

But the 17-year-old took full advantage, making four birdies before finishing in style by holing a 60-yard lob wedge for an eagle two the 18th for an opening 68.

A two-handicap member of the Irish Boys Development panel, Murphy was involved in a nine-man playoff for four spots but only got through on the seventh tie hole.

He was one of three players chasing two spots on the seventh tie hole and looked out of it after being forced to take a penalty drop from the wall at County Sligo’s short par four second.

But got through with a bogey five when one of his rivals played a wrong ball.

“That was a bit of luck,” said Murphy, “so I was delighted to play well today. It’s my first men’s championship and to be able to compete with these boys is great.

“Hopefully, I can do something solid tomorrow and get into the matchplay.”

While Irish internationals John-Ross Galbraith and Tiarnan McLarnon shot rounds of 71 and 72 respectively, it was a tough day for some of the title favourites.

Defending champion Jonathan Yates posted a 73, Colm Campbell a 75, Co Sligo’s Sean Flanagan a 77 and Castle’s Alex Gleeson a 79 that featured a quintuple bogey nine at the 15th.