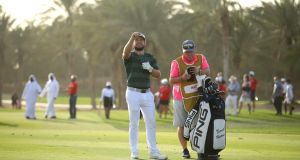 Tyrrell Hatton during the final round of the Abu Dhabi HSBC Championship. Photograph: Getty Images

That Angry Golfers sketch conjured up by the social media arm of the European Tour didn’t exactly come together too quickly, as Tyrrell Hatton – one of those players involved in the “therapy session” chaired by Tommy Fleetwood – has revealed.

“It was two years in the making, that video,” said Hatton, one of those to self-deprecatingly play on anger management issues.

Hatton was on board from the start but it took almost two years from everyone who agreed to be involved to be at a tournament at the same time and available for the seven-hour photo shoot.

“(I was) asked to be just be awkward and shy, which is me naturally. So I felt like I didn’t have to do anything different,” remarked Hatton of his own role playing, with the idea finally coming to fruition in Abu Dhabi last week.

Hatton’s star performance, though, was well and truly reserved for the course itself and his dominant win – bringing his career winnings on the European Tour to over €15 million – also moved him to a career best fifth in the world rankings.

And, in hitting the ground running for 2021, Hatton is aiming to bring that game to the Majors this season: “Everyone in their career, their goal is to win a major and I’m no different from that. Obviously the majors last year for me were disappointing to miss the cut in all three.

But golf’s a funny game. You’re trying your best every single week, and some weeks, it sort of works out better than others. So hoping that 2021, the majors fall in good weeks for me, and I can put in some good performances there.”

Q In playing a tee shot, Player A’s drive hits a tree, bounces backwards and come to rest behind the teeing area and into an unplayable lie. Can he take stroke and distance relief from the teeing ground under penalty even though it is closer to the hole?

A Yes. Rule 19.2a/1 allows a player to take stroke and distance relief in certain circumstances even when the spot of the previous stroke is nearer the hole than where the unplayable ball lies. An example of this is the situation outlined here, under penalty of one stroke; another example would be if a player has a downhill putt and putts off the putting green and the ball rolls off the green into a bad lie or into a penalty area, then the player may play again from the putting green under penalty of one stroke.

“Slightly bittersweet watching great golf starting up again this week knowing my fellow LET pros will be waiting another 3-4 months to start our season and get earning.” – Meghan MacLaren highlighting the long wait that most players on the Ladies European Tour face before getting regular tournament action.

“I’ll be back. And I’ll be better. Love y’all #golf.” – Max Homa following his final round disaster at the American Express, where a finishing 76 saw him tumble from a share of the lead down to 21st in a tournament won by Si Woo Kim.

“Think I’ll try that (thumb) thing next week in Dubai!!!” – Justin Rose getting in on the whole if you feel glum raise your thumb thing.

Lian-Wei Zhang became a history maker with his victory in the Caltex Masters in Singapore, when his one-stroke win over Ernie Els gave him the distinction of being the first Chinese player to win on the European Tour. He also became the first player from China to break into the top 100 on the official world rankings.

Els had been in invincible form in the run-up to the tournament, winning the Nedbank Challenge and going back-to-back in the two opening PGA Tour events of the season in Hawaii.

Els led by a shot playing the last hole but ran up a bogey five, with Zhang’s birdie – for a finishing round of 70 for a 10-under-par total of 278 – leapfrogging him above the world number two to claim what would prove to be his only European Tour title.

“The heat eventually got to me a little. I felt a bit tired towards the end, it was tough. I have to take my hat off to Zhang, he stuck in well and didn’t make any mistakes really,” said Els of Zhang.

Forward planning is very much en vogue for those involved with marking Mount Juliet’s 30th anniversary, with the Co Kilkenny resort – which plays host to the Dubai Duty Free Irish Open in early-July – adding a special Nicklaus Anniversary Singles competition, limited to 100 players, to the summer schedule with a July 14th date.

Matt Sandercock, the director of golf, has promised “once-in-a-lifetime prizes” of historical value for the singles competition which will be held on the Jack Nicklaus signature course just 10 days after the European Tour tournament.

Plans are also afoot to redesign the golf academy with a facility upgrade that will include a new custom fit experience with Callaway, TaylorMade and Ping as chosen suppliers and state of the art Trackman and SkyTrak simulators.

“It is a great honour for us to continue the golfing legacy at Mount Juliet,” said general manager Mark Dunne, with the resort previously host WGC-Amercian Express championships (won by Tiger Woods in 2002 and Retief Goosen in 2004) as well as three Irish Opens (1993-‘95).

3 – There are three Irish players in the field for this week’s Dubai Desert Classic on the European Tour: Shane Lowry, Graeme McDowell and Pádraig Harrington. 1 – Rory McIlroy is the lone Irish player competing in the Famers Insurance Open on the PGA Tour (Séamus Power is fifth reserve to get into the tournament at Torrey Pines).

“He’s a Golden Doodle, best dude in the world” - American Jessica Korda on her plans to celebrate her win in the Diamond Resorts Tournament of Champions with her three-year-old dog. Korda included a third round 60 (just the fifth in the LPGA Tour’s history) before shooting a final round 66 for a total of 24-under-par 260 to join Danielle Kang atop the leaderboard and then defeat Kang in a playoff to win the season-opening tournament

Gordon Elliott hearing to start at 9.30am on Friday 13:45
Weary England’s batting woes continue as India take control 13:33
First 2023 Rugby World Cup tickets on sale on March 15th 12:58
Joey Carbery on the Munster bench again for Connacht clash 12:35
Peter O’Mahony signs new deal with Munster and IRFU to 2023 10:54
Here is your handy guide to sport on television this week