Kirk gets it done in Hawaii; DeChambeau’s frontal lobe issues, word of mouth and more 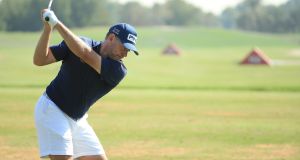 What’s that about age being just a number? Lee Westwood, who turns 48 in April, is maturing like a fine wine and kickstarts what will be his 28th season on the European Tour with his defence of the Abu Dhabi Championship title in the emirate this week.

With an 11th Ryder Cup appearance later this season on his radar, Westwood is aiming for a work/life balance in ensuring that he gets the optimum out of his mind and body: “I hope to get in 24, 25 tournaments this season. At 47, I have learned that recovery weeks are key. I’m not afraid to take time off now for three or four weeks and then go again. When I was younger, I could do 35-40 events in a year, but now I am comfortable with taking time off and recharging the batteries.”

Westwood has enjoyed a decent winter break, having finished his 2020 work with a runner-up finish behind Matt Fitzpatrick in the season-ending DP World Tour Championship which was enough for him to top the Race to Dubai order of merit and also to earn the Player of the Year accolade on the European Tour.

With the European points qualifying list for the Ryder Cup restarting in Abu Dhabi, the big-money tournament – the first of a Middle East swing that also takes in Saudi Arabia and Dubai – has attracted a stellar field with Westwood joined by fellow Ryder Cup prospects Rory McIlroy, Shane Lowry, Matt Fitzpatrick, Justin Rose and Tyrrell Hatton.

Resilient Kirk steps up in Hawaii

American golfer Chris Kirk’s biggest battles of late have come off the course, in fighting alcoholism and depression, but he finally got some on-course payback in the Sony Open where – in the final event of his medical exemption - his runner-up finish behind Kevin Na earned him sufficient points to regain his full membership of the PGA Tour.

“I never felt like it was a do-or-die type of situation,” said Kirk, speaking like a man with perspective on life. “But it totally changes everything being able to be back to picking my schedule like I’m used to over the last number of years. It’s huge. The last few years have been pretty wild with some up-and-downs for me. But to be in this situation to be healthy, to have a clear mind and a clear conscience is amazing, and golf is very much secondary to that. But still it’s my career, it’s what I love to do and to be able to have a week like I did this week is very gratifying. I’m just beyond words thankful.”

“I’ve done a lot of brain training, and the frontal lobe of my brain was working really, really hard. And that’s kind of what gave me some weird symptoms” - Bryson DeChambeau on why he experienced dizzy spells during last year’s Masters at Augusta National. DeChambeau revealed he saw doctors post-Masters to investigate any possible issues with his inner ear, had tests for eye pressure and also had an ultrasound on his heart.

4/4: Kevin Na birdied four of his final six holes to win the Sony Open and, in securing his fifth career PGA Tour victory, he joined four other players with an active streak of winning at least once in each of the last four seasons (Dustin Johnson, Bryson DeChambeau, Justin Thomas and Jon Rahm). “Before, it was like, ‘can I do it?’ . . . . now, I know if put myself in that position, I’ve got a good chance of pulling it off,” explained Na in how he has become a serial winner in recent seasons.

“Hey Fehertwits! Thank you for an amazing reaction since my show has ended. The last ten years have been a dream, thanks to the incredible people who agreed to be on this show, and all the men and women from NBC/Golf Channel. Stay tuned, you never know what might show up!” - David Feherty signalling the end of his TV show but hinting at a resurrection elsewhere?

“Heading to Palm Springs to start the 2021 season. Been working my tail off and I’m excited to get going. The offseason is nice but there’s nothing better than competing” - PGA Tour player Max Homa gearing up for the season with a start at this week’s American Express tournament.

“Looking forward to it”! - Sophia Popov, last year’s British Women’s Open champion, on finally getting to use full membership of the LPGA Tour. The German starts her season at this week’s Tournament of Champions tournament in Florida.

Back in the day when a double hit resulted in a penalty, Phil Mickelson was left to rue such an infraction in the final round of the Abu Dhabi Championship. Pablo Larrazabal was to prove the main beneficiary of Lefty’s action - on the 13th hole of the final round - as the Spaniard shot a final round 67 for a total of 14-under-par 274 and a one shot winning margin over Mickelson and Rory McIlroy. As it happened, McIlroy too had his rules issues in receiving a two-shot penalty during the third round.

“I played the least shots of anyone this week, so I can count it as a moral victory more than anything else,” remarked McIlroy in seeking to take away some positives.

For Larrazabal, his third career win on the European Tour was credited to having a new Callaway driver, adding 20 metres to his driving distance, in his hands. “I beat two of the three most talented guys in my era and in the last era as well. Phil Mickelson, man, and Rory, what are we going to say? I was sitting in that prize ceremony and I said, ‘Pablo, what the, hmmmmmm, are you doing here?’”

Q: In playing in a competition, a group of players arrive to the 12th tee to discover there are no tee markers in place on the teeing complex. What should they do?

A: If a player or players find one or both tee-markers missing, the player should seek help from the committee (Rule 6.1/1 - what to do when one or both tee-markers are missing). However, if that help is not available in a reasonable time, the player should use his or her judgment (Rule.1.3b(2)) to estimate the location of the teeing area. Recognising that such an estimation must be made promptly and cannot be precise, the player’s reasonable judgment of the location of the teeing area will be accepted even if later shown to be wrong (Rule 1.3b(2)).