Rahm makes Callaway switch; By the Numbers; On this Day; Know the Rules 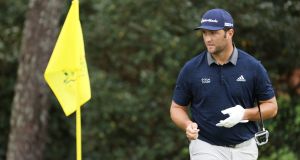 The points freeze is over. In the sunny climes of Hawaii, where the Sentry Tournament of Champions this week restarts the PGA Tour schedule, those European players in the field with aspirations to make Pádraig Harrington’s team for the rescheduled Ryder Cup – at Whistling Straits in September – can get a head start.

While the European Tour doesn’t get under way until the Abu Dhabi Championship later this month, the Tournament of Champions offers a number of Europeans – Sergio Garcia, Viktor Hovland and Jon Rahm – an opportunity to get up and running again, after the qualifying process was initially suspended last March and then frozen in July due to the Covid-19 pandemic.

While points accumulated up to that stop date back in July still stand, captain Harrington has adapted the qualifying system in an effort to ensure in-form players will make his team (four from the European points list, five from the world points list and then three wild cards to go with those automatic qualifiers).

Under the new weighted qualifying system, all Race to Dubai and official world ranking points earned between January 1st and May 9th will be multiplied by 1.5, while all points earned from May 10th until the qualification campaign ends at the BMW PGA Championship at Wentworth on September 12th, less than a fortnight before the actual match, will be doubled.

Harrington’s request to the European Tour board for the change was approved, with the Dubliner believing the restructuring will “reward our in-form players and give added interest” as the season proceeds.

The Tournament of Champions in Kapalua, so, kick-starts the revived qualifying with Garcia, Hovland and Rahm getting an opportunity to kick on in their efforts to automatically make Harrington’s team.

Although he didn’t win any tournament last year, Rory McIlroy was qualified to play (due to exemptions for any player to make last season’s Tour Championship), but opted not to travel to Hawaii and instead will make his seasonal reappearance at the Abu Dhabi Championship.

Jon Rahm, the world number two, has jumped ship: the Spaniard, who has used TaylorMade equipment since turning professional in 2016, has signed a new multi-year sponsorship deal with Callaway.

Rahm has committed to playing a full bag of Callaway clubs, including a prototype driver and irons and the Chrome Soft X golf ball. Under the agreement, Rahm will also use an Odyssey putter and wear Travis Mathew clothing.

“I have confidence in my new Callaway clubs and especially the golf ball, which has really impressed me during the testing process,” said Rahm in a statement.

He reportedly shot a new course record 59 at Silverleaf Country Club in Scottsdale, Arizona, over the winter break and will use the new equipment for the first time in competition at this week’s Sentry Tournament of Champions.

That’s how many players – so far – have qualified for the Masters tournament at Augusta National in April. There remain a number of ways for those not yet exempt to earn an invitation: winners of tournaments on the PGA Tour not already qualified will make it, while any player inside the top 50 on the official world ranking a week before the tournament on April 8th will also earn a spot.

“Some lousy news to end the year. I’ve had CV19 for the last couple of days and therefore will not be playing Kapalua @Sentry_TOC. Not sure yet about Sony and the rest of the West Coast. Thanks. – Jim Herman

“Prayers for @MarkCalc having back surgery today. Fusing his L4 and L5. It’s over a 5 hour surgery and will be staying in hospital for a couple of days. If all goes well, best case scenario is playing in 6-7 months” – Barbara Calcavechhia, wife of Mark, providing an update on the former British Open champion’s health.

Just a year ago, and it proved to be a dramatic opening tournament to a golfing year unlike any other: Justin Thomas emerged victorious from a three-man playoff in the Sentry Tournament of Champions in Kapalua, where he fended off Patrick Reed and Xander Schauffele for the 12th win of his career.

Not that he made it easy for himself. On the 18th hole in regulation, Thomas hooked his drive and then attempted to play a 3-wood from the rough which finished up in knee-high rough so thick that a large search party was unable to locate the ball. “I botched it up pretty bad,” Thomas would admit of his poor finish, as he bogeyed the Par-5 18th, only to get a reprieve when Schauffele missed a seven-foot putt to win the tournament.

“At the end of the day, you need stuff to go your way and it definitely did today and it feels great. I got lucky to even have that opportunity,” confessed Thomas.

Q
In playing a hole, Player A’s ball lies in such close proximity to Player B’s on the fairway that it interferes with Player B’s ability to play his shot. On being requested to mark his ball, Player A does so but, in lifting the ball, a loose twig lying against his ball is moved. Is she required to put the twig back when it is being replaced?