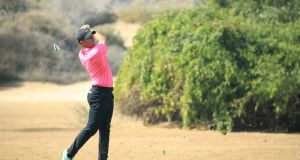 Rory McIlroy plays his second shot on the 13th hole during day one of the Abu Dhabi HSBC Championship. Photo: Andrew Redington/Getty Images

New year, but the strut of old was back: Rory McIlroy rediscovered his comfort zone in the desert, as a flawless opening round eight-under-par 64 – his putter acting like a magic wand as he rolled in over 150 feet of putts – propelled him to the top of the leaderboard in the European Tour’s season-opening Abu Dhabi HSBC Championship.

Although thick morning fog delayed play for just short of three hours, McIlroy was immune from any distraction: once he got going, it was with a pep in his step and a wonderful display of putting in a bogey-free round that saw him take a one-stroke lead over Englishman Tyrrell Hatton, with fading light eventually forcing play to be postponed with 66 players failing to complete their rounds.

McIlroy, playing for the first time in nine weeks, since the Masters at Augusta National last November, was imperious in his playing the course sculpted in the Emirate where he has frequently contended without ever lifting the falcon trophy.

The world number six has benefited from having his long-time coach Michael Bannon around him more regularly, including a winter visit to Florida but crucially also with him on-site this week, and McIlroy’s game was sharp with no evidence of rust; tee-to-green, he played beautifully, but it was on the greens that he flourished in requiring just 27 putts, including three birdies from outside 25 feet.

Although McIlroy failed to win a tournament throughout the disrupted 2020 season, and struggled on the tours’ restarting after the coronavirus lockdown, there were glimpses of his old self towards the tail-end of the year, most notably at the Tour Championship and the Masters, where he was fifth.

“It was getting better as the year went on, and honestly it was sort of disappointing that it finished when it did because I felt like I was getting right back into it,” said McIlroy, who has also used veteran coach Butch Harmon as a second pair of eyes.

“I didn’t really take much time off after Augusta. I sat at home for maybe three or four days and was like I just need to get out there and sort of keep this going. I played quite a bit over the Christmas break and practiced quite a bit, felt maybe as sharp as I’ve ever done coming into the start of the season. It’s paid off early,”

Of the tie-up with Harmon, McIlroy said: “He’s worked with so many players. So if you’re trying to explain to him, ‘look, I’m trying to do this or I’m trying to create that feeling’, the database of players he’s worked with over the years, he could say, ‘well, Freddie Couples felt this or Tiger did this or DJ felt that. It’s always nice to have that reference.”

But Bannon is the go-to man, and his influence is increased when physically present with McIlroy rather than virtually. “Michael knows my swing better than anyone knows it, inside out. It’s great to have him here and it’s great that things are sort of slowly getting back to normal where I’ll be able to see him more regularly this year, and I think that will really help,” conceded McIlroy.

McIlroy’s putter made the most of his approach play, yielding a 100 per cent return on putts inside eight feet while also getting those three bonus putts from outside 25 feet in an impressive seasonal debut. “It’s obviously a lovely way to start the year,” he said.

“Fun to watch,” was how Lee Westwood, the defending champion, playing in the same group as McIlroy and world number three Justin Thomas described the masterclass put on by McIlroy. Thomas, for his part, struggled to a one-over-par 73, while Westwood – despite being much shorter off the tee than the two big-hitters – used his accuracy to navigate an opening 69.

McIlroy took a one-stroke clubhouse lead over Hatton with Paraguay’s Fabrizio Zanotti a shot further back in third place. “I think I got away with it,” said Hatton of a round where he struggled with the driver, only finding one fairway in a run of 10 holes at one point. “I’m really happy with that [score].”

Ryder Cup captain Pádraig Harrington was also among that first wave to complete their rounds and signed for an opening two-under-par 70, with four birdies and two bogeys on his card. “I’m a little bit ahead of where I’ve been in other years,” he remarked of his sharpness.

However, as the wind picked up significantly for those later starters, Shane Lowry struggled and was four over on his round through 11 holes when play was halted due to fading light.

Lowry suffered a triple-bogey seven on the ninth, where water is in play off the tee, and faces a fight to survive the cut while Graeme McDowell managed the conditions better and was one under on his round through 10 holes when darkness fell.

British and Irish unless stated, par 72, 66 players yet to complete their first rounds