Harrington to open season in Dubai; Word of Mouth; On This Day, Twitter Twaddle and more 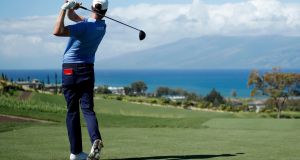 Harris English hits his tee shot from the seventh tee during the final round of the Sentry Tournament Of Champions at the Kapalua Plantation Course. Photo: Cliff Hawkins/Getty Images

As hat tips go, the one extended by Harris English – who ended a winning drought on the PGA Tour that had extended into an eighth season when he won the season-opening Tournament of Champions in Kapalua – to his coach Justin Parsons was right up there.

“Justin Parsons has been an unbelievable help at home (in) getting me back on track,” said English of the Co Down golfer-turned-coach who holds the position of elite golf instructor at the Sea Island Performance Centre at St Simons Island in Georgia where he numbers English, along with Louis Oosthuizen, Patton Kizzire, Michael Thompson and Séamus Power among his list of tour clients.

Of Parsons’ impact on transforming his game, English – who moved from 28 in the world rankings up to 17th on the back of his win, defeating Joaquin Niemann in a playoff – remarked: “(Parsons) is kind of a little bit of a sports psychologist as well (as) keeping me on track and we kind of break down days just likes a football game. Four quarters, play your quarter really well, do all I can do that day and move on to the next. And I feel like I’ve done a great job of that this week. In the past few months, I’ve had some struggles on Saturday. But I overcame that this week and I knew I had to come out and play really well and I did. It’s been an awesome ride.”

English’s last individual PGA Tour win came in Mayakoba Classic in 2013, although he team up with Matt Kuchar at the QBE Shootout last December to win that team event.

Harrington to kick-off in Abu Dhabi

Pádraig Harrington has confirmed he will get his season’s work under way at the Abu Dhabi Championship, the Rolex Series event that kick starts the European Tour later this month.

The Abu Dhabi championship restarts the Ryder Cup’s European points list and the 49-year-old Dubliner – heading into his 25th season on the PGA European – will use the event to cast an early year’s eye on a large number of potential members of the team for Whistling Straits in September with Rory McIlroy, Justin Rose, Henrik Stenson, Shane Lowry and Graeme McDowell among those committed to playing in the tournament on January 21st to 24th.

“It’s nobody else’s fault but my own. I just have to figure out how to manage (my putting) a little better and, as time goes on, I think we will” – Bryson DeChambeau on his putting issues which proved to be his Achilles heel at the Tournament of Champions where he ultimately finished tied-seventh, five shots behind winner Harris English.

“We had no plans to stage any of our championships at Turnnberry and will not do so in the foreseeable future. We will not return until we are convinced that the focus will be on the championship, the players and the course itself and we do not believe that is achievable in the current circumstances” – Martin Slumbers, chief executive of the R&A, confirming that the British Open won’t be returning to the Donald Trump-owned resort in Scotland any time soon. The British Open was last staged at Turnberry in 2009, when it was won by Stewart Cink. Slumbers’ statement followed confirmation that the PGA of America has decided not to hold next year’s US PGA at Trump Bedminster as originally planned.

4: Séamus Power – looking for his first start on the PGA Tour since the Bermuda Championship last November – is fourth reserve to get into the field for this week’s Sony Open at Waialae Country Club in Hawaii.

“We had a special week at Kapalua with birthday celebrations and being with @joaconiemann on his impressive Sunday charge. Thank you for the birthday wishes. And thank you to the @Sentry_TOC team for the cake and all of their hard work this week” – Sergio Garcia on celebrating his 41st birthday in Hawaii with a tied-11th finish in the Tournament of Champions.

“Just had a dream that all of my woods were stolen at the driving range. The ones Ping have just made up for me to take to Dubai. I was distraught. I never would have thought I’d feel that way about my driver” – Eddie Pepperell, en route to Dubai for warm weather practice ahead of resuming tournament play at the Abu Dhabi championship later in the month, being Eddie.

“The dream featured Chris Wood and Matt Fitzpatrick also which was a bit weird. Matt was doing some funky drill with a Swiss ball” – Eddie, again.

“I love that you call yourself just “a bit” weird” – Thomas Pieters responding to Mr Pepperell.

The self-styled “Big Easy” made it all look, well, easy as he decimated the field at the PGA Tour’s season-opening Mercedes Championship. With Tiger Woods absent due to knee surgery, Ernie Els won the tournament by eight strokes - with Rocco Mediate and KJ Choi as distant runners-up - in completing the final seven holes of his finishing round with five birdies for a 67, that left him with a tour record winning total of 31-under-par on the defenceless Plantation Course.

Els scooped a $1 million payday for his 11th career win on the PGA Tour: “I’m not trying to send a message to anybody, I’m just trying to prove to myself that I can play well. Let’s see where it takes me,” said the South African, who would maintain his hot streak by going on to win the following week’s Sony Open.

The 31-under-par scoring record beat the previous marks of 28-under held by John Huston (1998 Hawaiian Open) and by Mark Calcavecchia (2001 Phoenix Open). “You want to say when you win Majors that you played your best, but this is right up there,” added Els.

Q: In matchplay, Player A concedes a putt to Player B and hits the ball away on the same line as he may subsequently use but does not do so deliberately to learn information about the putting green. Is Player A liable to a penalty for his actions?