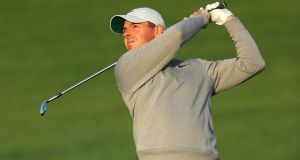 Rory McIlroy during the Pro-Am ahead of the Abu Dhabi HSBC Championship. Photograph: Getty Images

Nothing like the inside track to reassure that Tiger Woods’s latest surgical procedure on his back won’t keep him away from the course any longer than necessary.

Cue Rory McIlroy, who is starting his season’s work at the Abu Dhabi HSBC Championship in the Middle East: “I’ve known for a while. It happened on 23rd of December. I’m obviously pretty close with him. So, yeah, I think in his words, it was a small procedure . . . . he was back on his feet the next day.

“I think they’re just trying to clean a couple little bits up. Obviously, he won’t be playing for the next couple of months but he should be back for the Masters, if not before that. I think he will be just fine.”

Woods underwent surgery on his back to remove a pressurised disc fragment, after the 45-year-old 15-time Major champion suffered discomfort during the PNC Championship in December - where he played with his young son Charlie - and was advised to undergo the procedure.

As for McIlroy, a return to tournament play in the desert offers up the opportunity for the current world number six to break a career duck in terms of opening his season with a win. Since 2008, the Northern Irishman has contended in his first tournament of the season without ever winning . He has recorded no fewer than 11 top-fives in 13 events.

“The fact that there is no win in there is a little surprising I guess. I come out at the start of the year and I don’t think you’re as fully sharp as you would want to be but at least the optimism is there and the enthusiasm is there,” said McIlroy, who aims to end that particular statistic after working with his coach Michael Bannon prior to Christmas and having him on-site with him in Abu Dhabi this week.

McIlroy went through last year without a tournament win and seemed more affected than most players by the absence of any crowds at tournaments. In the off-season, he has focused on a number of areas to seek improvement and identified his approach shots as one area that needed work.

“My approaches off the fairway were actually pretty similar, and then there was a couple different like putting, like between four and eight feet, wasn’t quite as good as it was the previous year . . . so, goals in terms of, you know, I want to get those better. Obviously if I get those better, my game will become better.

“It’s hard because who goes and drops a bag of practise balls in the rough and starts hitting shots in the rough. You go to the range and hit off a perfectly manicured piece of turf, and that’s nice but that’s not what you’re always doing on the golf course.

“Just little things like that, performance goals and goals that if I practise the right way and I get those right, then it will sort of be a knock-on effect and help everything else,” said McIlroy, one of the headline acts in Abu Dhabi where the European Tour’s Ryder Cup qualifying reboots after being put on hold last summer due to Covid-19.