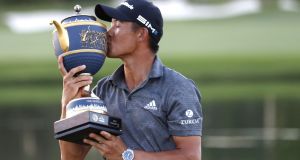 Collin Morikawa celebrates after winning the WGC-Workday Championship at The Concession Club south of Tampa in Florida. Photograph: EPA

Collin Morikawa, the US PGA champion, cruised along like a well-oiled machine in the final round of the WGC-Workday Championship at The Concession Club south of Tampa in Florida, but it proved to be an altogether more of a topsy-turvy journey for Rory McIlroy

Although he claimed a top-10 finish on what is the start of the Florida Swing, with happy hunting grounds at Bay Hill and Sawgrass over the next fortnight, McIlroy again struggled to keep bogeys off his card and, indeed, the unpredictable nature of his round was shown in the haul of five birdies and four bogeys in a round of 71 for 12-under-par 276.

McIlroy’s 66 in the third round had propelled him into a position to make a last day surge, but his play over the front nine – particularly on the par threes, bogeying both the fourth and sixth holes – led to him stalling and the world number eight turned in 37, one-over on his round, and struggling even to make the top-10.

If his birdie on the 10th briefly provided some impetus, another par three – the 11th – soon provided a speed bump.

He did manage a birdie on the 12th but could only par the par five 13th and, while he bounced back from a bogey on the 15th with back-to-back birdies on the 16th and 17th holes, McIlroy’s work finished with a two-putt par on the last, leaving him in tied-sixth.

Séamus Power entered the final round of the Puerto Rico Open on the fringes of contention but failed to ignite, firing a finishing 72 for a total of 10-under-par 278 that left him nine shots adrift of South African Branden Grace who claimed his second career win on the PGA Tour.

“I didn’t take advantage of the back nine and that was kind of heartbreaking. Overall, it was a pretty solid week but just a disappointing finish. It was just one of those days where I didn’t quite come together.

“Nothing was bad, everything was decent . . . .when I look back [at the week]) there was lots of good stuff and a lot to build on,” said the 33-year-old Waterford man, who finished in tied-22nd.

On the LPGA Tour, Leona Maguire marked her first appearance of the season in the Gainbridge Championship at Lake Nona with a solid performance: a final round 72 for a six-under-par total of 282 left the Co Cavan golfer in tied-16th, with American Nelly Korda fashioning a win.

Korda’s final round 69 for 272 gave her a three-stroke win over Lexi Thompson and Lydia Ko, with world number one Jin Young Ko two shots further adrift in fourth.

Maguire got off to a rocky start with back-to-back bogeys on the second and third but showed her fortitude to reel off 11 successive pars before a strong finish with birdies on the 15th and 18th to secure that top-20 finish.