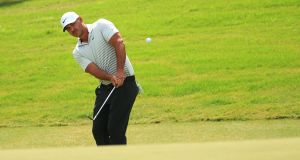 Sometimes, it pays to fly in under the radar. Billy Horschel, without a win on the PGA Tour since his Byron Nelson win of 2017, flew in from left-field to claim the clubhouse lead with in-form Australian Cameron Smith at the midpoint of the WGC-Workday Championship at The Concession Club outside Tampa in Florida.

However, the leading pair were soon usurped by Brooks Koepka, who carded a second round of 67 to move to 11 under par. Koepka’s lead could have been worth two strokes but he failed to get up and down for par on the 18th.

That was his sole dropped shot on Friday however, and he is well placed to follow up his victory in the Phoenix Open at the start of February with another title this weekend.

Horschel meanwhile had reached the 10-under-par mark of 134 with a second successive 67, while Australian Smith - riding high at 27th in the world rankings and chasing a first win on tour since his Sony Open success last year - added a 66 to his 68 to move into contention a week after finishing fourth at the Genesis Invitational, his fourth top-5 finish in his last seven tournaments.

“It was decent, but it definitely wasn’t my best stuff,” claimed Smith, the 27-year-old Australian with a distinctive mullet hairstyle. “The last few weeks I feel like I’ve probably done more practice than I have the last year. It just goes to show what a little hard work can do. I just feel like I’m playing really solid at the moment. This is probably the best my ball-striking has felt to myself in a very long time. I’m really comfortable with the short and long stuff and looking forward to the weekend. “

Rory McIlroy’s adventures on the course designed by Jack Nicklaus in association with Tony Jacklin continued, as the Northern Irishman’s bid to make a move was undone by a double-bogey seven on the Par 5 seventh hole where his tee shot finished in a fairway bunker and his recovery moved no more than 15 yards into trees. He eventually reached the green in five shots and two-putted for a double bogey.

In fairness to McIlroy, he recovered with birdies on the ninth, 11th and 12th holes before dropping a shot on the Par 3 14th after a wild tee shot, at which point he was one-under on his round and four-under for the tournament.

When McIlroy then threatened to mount a late charge with back-to-back birdies on 16 and 17 he then stalled again with a bogey at the 18th, a second round of 70 leaving him on five under par for the tournament and with plenty to do.

Shane Lowry had opened with a level-par 72 and again failed to catch fire in a second round, which saw him one under - two birdies and one bogey - on his round through 12 holes. After back-to-back birdies on 12 and 13 Lowry parred his way home for a 70.

In the Puerto Rico Open, both Séamus Power and Pádraig Harrington survived into the weekend: Power, the Waterford player who had missed all three cuts on the PGA Tour this season, shot a 70 to reach the midpoint on five-under-par 139, while Harrington added a 72 to his opening 70 for 142 with American Brendan Wu, who mainly plays on the Korn Ferry Tour and world ranked 182nd, recording a second round 67 to claim the clubhouse lead on 11-under-par 133.

On the LPGA Tour, Leona Maguire stayed very much in contention in the Gainbridge Championship at Lake Nona in Orlando, Florida: the 26-year-old from Co Cavan, making her seasonal debut on the circuit, added a second round 72 for a midway total of three-under-par 141 to be inside the top-20 heading into the weekend.

Lydia Ko, a two-time Major champion claimed the clubhouse lead on 10-under-par 134 in adding a 69 to her opening round of 65, while Annika Sorenstam - playing on the tour for the first time since 2008 - was on the cut-line after adding a 71 to her opening 75, which had included a penalty stroke which was subsequently shown to be a wrong decision by the on-course rules official.

Stephanie Meadow failed recovery sufficiently from her opening round 76, adding a 72 for 148 that left the Northern Irishwoman outside the cut.