‘Golf is so far from the equation right now, it’s not even on the map at this point’ 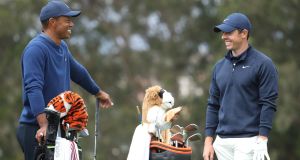 Tiger Woods and Rory McIlroy smile on the fourth tee during the first round of the 2020 USPGA Championship at TPC Harding Park in San Francisco, California. Photograph: Christian Petersen/PGA of America via Getty Images

Tiger Woods had never planned on being at The Concession Club south of Tampa in Florida for this week’s WGC-Workday Championship. Yet, even in his absence, it was almost as if he were more relevant than any of those who had turned up, with Rory McIlroy – perhaps more cognisant than most of the player’s past battles with injuries and surgeries – observing: “He’s not Superman!”

The question had been posed to McIlroy of Woods’s ability to recover from the acute injuries sustained in Tuesday’s single-car accident in California, with the Northern Irishman providing the perspective that Woods’s wellbeing rather than the sport in which he was an iconic figure was the more important.

“He’s a human being at the end of the day. And he’s already been through so much. At this stage. I think everyone should just be grateful that he’s alive, that his kids haven’t lost their dad. That’s the most important thing. Golf is so far from the equation right now, it’s not even on the map at this point,” said McIlroy who, although 14 years younger, has established a personal relationship as well as being part of the same Nike business stable with Woods.

In recalling Woods’s past resilience – which has seen the golf icon make one comeback after another from surgeries, some associated with his knee and more regularly following back and spinal procedures – McIlroy recounted a lunch the pair had in the spring of 2017, just after Woods had undergone spinal fusion. He could barely walk. Two years later, he was having the Green Jacket at the Masters slipped onto his shoulders, his 15th career Major title.

“You know, from hardly being able to walk or to stand to being able to get his game back into shape, I don’t think people to this day, people don’t realise – [with the exception] of a few of us out here, JT, Rickie, Dustin and myself, the guys that have gotten a little bit closer with him – the struggles and the things he had to deal with to get to that point to win in Augusta in 2019.

“Look, I don’t want to take anything from what Ben Hogan did after his car crash or any of the other comebacks that athletes have had in other sports, but right now I can’t think of any greater comeback in sports than the journey that he made from that lunch we had in 2017 to winning the Masters a couple years later.”

For sure, nobody can doubt or question Woods’s powers of recovery. His actions more than any words had provided the proof of his resilience and fortitude through the years. Yet – as McIlroy observed quite correctly – “he’s already being through so much”; and, while only Woods’s inner camp and medical team know exactly how steep the road to recovery will be this time, in a body of 45 years of age, the tour – as with this week’s WGC – will somehow move on.

As McIlroy put it: “It’s always great when he plays at a tournament or is out here because it gives that tournament an extra dimension that it usually doesn’t have . . . we’re sort of heading towards that day that Tiger wasn’t going to be a part of the game. I’m not saying that that was soon. [But] before this accident, he was rehabbing a back injury and hopefully going to come back and play this year.

“It’s inevitable that one day he won’t be a part of it, and that’s going to be just something that the game of golf and the tour is going to have to deal with and adapt to. Obviously, hopefully he comes back and is able to play; but, if he’s not, I think he’ll still be a part of the game in some way, whether it’s obviously his design business and his foundation and hosting golf tournaments. It may be the end of seeing the genius at work with a club in his hand, but there’s still a lot of other ways that he can affect the game in a great way.”

For those 72 players in the no-cut field at the WGC-Workday Championship this week, part of the challenge will be to turn the focus to their own game. “It’s obviously going to take a bunch of attention away from this golf tournament, but that’s nothing to do with us, that doesn’t fall on us, and we don’t really feel that when we’re playing anyway,” said McIlroy, who is aiming to bounce back from a missed cut in the Genesis Invitational.

McIlroy doesn’t do many missed cuts (his last before the Genesis came in the British Open at Royal Portrush in 2019) but he has traditionally bounced back strongly and, with a strong run of events on the Florida Swing, the WGC leading into next week’s Arnold Palmer Invitational and the Players, he is attempting to clear his mind when in the act of swinging the golf club.

As he put it: “I learned a couple of things last week [in Riviera]. I was thinking way too much about the golf swing last week, even when I was out on the course. Like, I probably spent five to 10 seconds over the ball longer than I usually do. There’s quite a lot going through my head. You can’t play golf like that.

“So I need to play with more freedom and I need to be able to swing away. So it’s sort of like do the work on the range and just trust that the more work you do, the more that it’s just going to naturally find its way in there.”