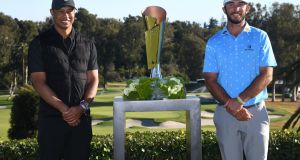 Max Homa stands with the trophy and tournament host Tiger Woods after defeating Tony Finau of the United States in a playoff to win The Genesis Invitational at Riviera Country Club in Pacific Palisades, California. Photograph: Harry How/Getty Images 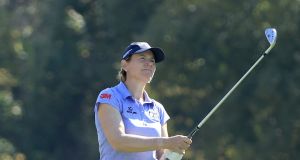 Annika Sorenstam plays a shot during the first round of the Diamond Resorts Tournament Of Champions at Tranquilo Golf Course at the Four Seasons Golf and Sports Club in Lake Buena Vista, Florida. Photograph: Sam Greenwood/Getty Images

Leona Maguire and Stephanie Meadow are among the young brigade who kick-start their season’s work at this week’s LPGA Tour stop at Lake Nona in Orlando, Florida . . . but it’s safe to say that a blast from the past will take centre stage, as Annika Sorenstam – who hasn’t played on tour since 2008 – returns to the competitive fairways.

“This is just an appearance, it’s not a comeback,” said the 50-year-old Swede, who has her sights set on adding to her golfing roll-of-honour further down the road with outings in senior (over 50) championships.

Sorenstam and Laura Davies, the 57-year-old English player, are in the field for the Gainbridge LPGA Championship as part of a special “Hall of Fame” category. For Sorenstam, it’s just a little bit special given that the tournament will literally be taking place in her backyard, as her family home is on the Lake Nona property.

With no fewer than 94 tournament wins worldwide, including 72 on the LPGA Tour, and with 10 Major titles to her name, Sorenstam – who recently assumed the chairmanship of the International Golf Federation – has undisputed legendary status in the sport.

Through her Annika Foundation, she has also helped young up-and-coming players – among them Maguire, who was a past recipient of the Annika Award for being the number one ranked collegiate player in the United States during her time at Duke University – and a large number of the younger breed playing in Lake Nona this week have benefitted from her input.

Sorenstam’s last competitive appearance on the LPGA Tour was all of 13 years ago and, although she has been practicing in recent weeks with this event in mind, she confessed: “I used to literally just push automatic and shots would just go where I visualised and now it’s not so automatic anymore. It’s the scoring part, it’s very up and down.”

Maguire and Meadow return to tournament action for the first time since the Tour Championship in December, in a field which is headed by world number one Jin Young Ko.

Amateurs to be allowed cash in on their image

Golf’s rules governing bodies, the R&A and the USGA, have announced proposals for significant changes to the Rules of Amateur Status following a period of consultation dating back to 2017.

Under the proposed modernisation changes, a set of rules that redefine the distinction between amateur and professional golf will mean players can only lose their amateur status through three distinct acts: 1) accepting a prize in excess of the prize limit; 2) accepting payment for giving instruction; and, 3) accepting employment as a golf club professional or membership of an association of professional golfers.

Grant Moir, the director of rules at the R&A, remarked: “The Rules of Amateur Status play an important role in protecting the integrity of our self-regulating sport but the code must continue to evolve. This is particularly so in relation to the modern elite amateur game, where many of the players need financial support to compete and develop their full potential and the proposed new rules will give greater scope for this.”

Under the proposals, due to come into play on January 2022, amateurs will be allowed to be paid for advertising and promotions and use their name and image for such marketing.

There are two Irish players in the fields at each of the tour stops on the LPGA and PGA Tours this week: Leona Maguire and Stephanie Meadow are in action in the Gainbridge Championship at Lake Nona; Rory McIlroy and Shane Lowry are playing in the WGC-Workday Championship at The Concession; and Pádraig Harrington and Séamus Power are competing in the Puerto Rico Open.

“I just didn’t play well enough” – the honest self-appraisal of Sam Burns, who fell at the final hurdle in his quest to be a pillar-to-post winner of the Genesis Invitational. The 24-year-old American nonetheless continued his upward move up the world rankings, having started the season ranked 154th, up to a career-best 80th after a third place finish in the LA tournament.

I spent over a dozen years trying to get Tiger to give me a high five at Riviera and today he handed me a trophy hahaha what a world! – Max Homa, who used to attend the tournament as a young boy, after winning the Genesis Invitational.

Congrats to @maxhoma23 on an amazing playoff finish and for making LA proud. Thank you to @GenesisUSA and everyone who has supported @TGRFound this year. Riv is a very special place and we already can’t wait to get back – tournament host Tiger Woods, still recuperating from surgery to his back, tipping his cap to Homa.

To be honest @tonyfinaugolf, 37 top tens in the last few years on the PGA Tour is spectacularly good. Like man, I think you’re awesome – European Tour player Eddie Pepperell providing some words of solace to Finau, who lost in a playoff to Homa.

Pat Fitzsimons, in his third season as a professional, claimed what proved to be his only success on the PGA Tour when he outclassed a stellar field to lift the Glen Campbell Los Angeles Open at Riviera Country Club.

The 24-year-old had shown decent form heading into the tournament, finishing fifth in the Bob Hope Desert Classic and ninth in the Andy Williams Open in the preceding two weeks (you might have noticed it was a time when singers and actors thought it hip to host golf tournaments): “I’ve been playing real well and I’ve good momentum. I just realised I couldn’t be afraid anymore. I didn’t have that bogey-birdie syndrome anymore,” commented Fitzsimons, after a course record-breaking third-round 64 propelled him into the lead.

Fitzsimons, from Oregon, carded rounds of 70-71-64-70 for a nine-under par winning total of 275, four strokes clear of Tom Kite for what would prove to be his only success on the main circuit.

Q
On arriving to his ball in the middle of the fairway, Player A finds that it is in casual water and is still slowly moving. Aware he is entitled to lift the ball to take relief even though it is moving, he also notices that if the ball continues moving it will likely stop at another point some five metres away that would be in a better spot from this to take relief. Is he allowed to wait?

A
The short answer is yes. The player is entitled to take relief under Rule 16.1 and is allowed to let the ball move to a better spot before determining the nearest point of complete relief so long as the player does not unreasonably delay play (exception 3 to Rule 10.1d and Rule 5.6a).