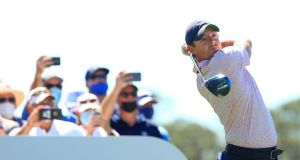 Rory McIlroy tees off on the 13th in his opening round on Thursday. Photograph: Mike Ehrmann/Getty

Tantalisingly close at times, frustratingly out of reach at other times: Rory McIlroy’s game showed many good signs for the most part of the opening round of the €8.65 million WGC-Workday Championship at The Concession Club outside Tampa in Florida, only to be irritatingly undone by dropped shots in a topsy-turvy display that eventually yielded a three-under-par 69, to lie three adrift of first round leaders Webb Simpson and Matt Fitzpatrick.

Although a little frustrated with his day’s reward, McIlroy remained very much in it, for sure, but - with four missed putts from inside seven feet - it could have been even better for the Northern Irishman which explained his frustration.

Following on from his missed cut at the Genesis Invitational in Los Angeles last week, at least McIlroy signed his card - six birdies and three bogeys - aware that, with no cut in the limited field WGC event, he remained very much in the title hunt.

McIlroy got off to a fast start on the course designed by Jack Nicklaus in collaboration with Tony Jacklin: on the 10th, he played a fine approach from a fairway bunker and rolled in a four-footer for birdie and, on the Par 5 13th, he reached the putting surface in two and two-putted for another birdie. A big drive of some 345 yards on the 16th set up a gap wedge approach to eight feet for yet another birdie, and he was cruising.

A first dropped shot of his round came on the first hole, where he found a fairway bunker off the tee, and after bouncing back with a 12-footer for birdie on the second, McIlroy slipped up with back-to-back bogeys. On the fourth, he missed the green with his approach and chipped to seven feet only to miss the par putt back. Then, on the fifth, (his 14th of the round), McIlroy’s approach found a greenside bunker and he failed to get up and down.

“I missed three putts on the last nine holes that I thought for sure were going to go right to left and all missed on the right edge . . . . it is hard, even the putt I hit on our 17th hole (the eighth), I saw JT was on the same line, I hit mine on the right edge and it never budged,” said McIlroy, who headed to the range and the putting green following his round.

He added: “I have a good feeling with what I am doing with the long game, so I’m going to the putting green and try and figure it out a bit . . . . it’s frustrating, because you come off the course feeling you could be three or four shots (better). I am going to keep doing the work.”

Shane Lowry’s round lacked much of the drama of McIlroy’s, as the 2019 British Open champion - playing stateside for the first time this season having opened his year’s work in the Middle East Swing on the European Tour - finished at level par in a round bookended by bogeys with two birdies in the middle at the 17th and third.

Simpson, the former US Open champion, hit a hot streak on his homeward run - with a hat-trick of birdies from the 15th - to come home in 32 for his 66 to be joined by Fitzpatrick, while in-form Brooks Koepka, winner of the Phoenix Open earlier this month, also finished strongly with two birdies in his closing three holes for a 67.

Koepka sits in second place at five under alongside Billy Horschel, Sergio Garcia and Kevin Kisner.

“The course is fantastic. It’s firm. I was hoping it would get firm and fast. It takes that lengthy scorecard down a little bit, so I’m very pleased with the start. I worked on a couple things last week with putting alignment and with my driver and I saw good things from that today,” admitted Simpson, the world number nine.

World number one Dustin Johnson was out of sorts, signing for a five-over 77 while Bryson DeChambeau could also only manage a 77 and Tommy Fleetwood a 75. Matthew Wolff withdrew from the field after a bizarre round of 83 in which he made everything from a two to an eight including four birdies as well as a quadruple bogey, a triple bogey and two double bogeys.

In the Gainbridge Championship on the LPGA Tour, Stephanie Meadow - on her seasonal debut - struggled to an opening round 76, four-over-par, in the tournament at Lake Nona, where Leona Maguire, also making her first appearance of the year, was hugely impressive in getting to two-under through 13 holes of her first round with the clubhouse lead held on four-under 68 by a group of six players, among them world number one Jin Young Ko.

4 Time in jail made a golfer of Notah