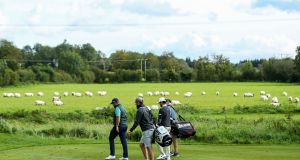 The European Tour, LPGA Tour and Ladies European Tour will join forces for a mixed tournament at the ISPS HANDA World Invitational in Northern Ireland this summer.

The 288-strong event — 144 men and 144 women — sees the tournament elevated to European Tour status following its inaugural edition on the European Challenge Tour in 2019.

The event will be played over two courses, Galgorm Castle and Massereene, from July 28th-August 1st and form part of the European Tour’s 2021 UK Swing, taking in tournaments across the four home nations in July and August.

Keith Pelley, chief executive of the European Tour, said: “We are excited to once again work alongside ISPS HANDA and Modest! Golf Management, both of whom share our vision of driving golf further through innovation and inclusivity.

“Galgorm Castle was a hugely popular addition to our Race to Dubai schedule in 2020 and we are all looking forward to returning there in July.”

The women’s field will be split equally between the LPGA and the Ladies European Tour, while the $2.35 million purse (€1.9m) will be divided evenly as the men women compete for two equal prize funds.

The men’s tournament will count towards the European Tour’s Race to Dubai and carry Team Europe Ryder Cup points.

The women’s tournament will count towards the Race to the CME Globe for women on the LPGA Tour, the Race to Costa del Sol on the Ladies European Tour (LET) and Solheim Cup points for both Team Europe and Team USA.

Competition will take place over a traditional 72-hole stroke play format, with men and women competing at the two venues over the first two days before a halfway cut reduces the field to the top 60, including ties, in both draws.

The third round will take place at Galgorm Castle before a further 54-hole cut takes place with the top 35 and ties from the men’s and women’s draws advancing to the final round on Sunday.