Kevin Kisner is forced into an apology, Leona Maguire goes from strength to strength 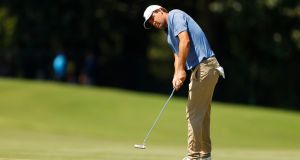 Scottie Scheffler will miss the US Open after testing positive for Covid-19. Photograph: Sam Greenwood/Getty

The fragile nature of the bubble in which tour players are living has been demonstrated by the enforced withdrawal of Scottie Scheffler from this week’s US Open at Winged Foot, after testing positive for Covid-19.

Scheffler, 24, is asymptomatic and isolating at home but has withdrawn in line with tour precautions with South African Brandan Grace coming into the field in his place.

Up to 28th in the latest world rankings after a strong showing since the PGA Tour’s resumption in July - which has seen him register three top-10s in his last four appearances, including a fourth place at the US PGA - Scheffler’s withdrawal due to contracting the virus comes at a time when fellow tour player Kevin Kisner found himself in hot water and forced to issue an apology for his response to a tweet by former NBA basketball player Rex Chapman after his friend’s parents died from the virus.

Kisner responded by saying, “guess they can’t follow the guidelines” and was forced to issue an apology. “I made a reckless comment. I diminished the real experience of pain and loss suffered by many during the pandemic. I am not without empathy, but I certainly exercised poor judgement.”

Leona Maguire on an upward curve

Leona Maguire is trending in the right upward trajectory as far as career advancement, with a first top-20 finish in a Major - at the ANA Inspiration in California - representing another notable milestone.

The 25-year-old Co Cavan golfer earned $39,726 for her tied-18th finish at the ANA to move to 53rd on the LPGA Tour order of merit (with $116,966 from seven appearances in a season shortened due to Covid-19). Maguire deemed her first visit to the desert “a success,” adding: “bogey free Sundays at a Major are lots of fun, even in 45 degrees (celsius).”

In her rookie season, Maguire’s playing status is assured for the 2021 season because of changes made due to the pandemic, however she can still improve that category by winning a tournament and she will seek to bring the momentum of a strong weekend’s work at Rancho Mirage onward to this week’s LPGA Tour stop at the Portland Classic in Oregon. Stephanie Meadow is also in the field.

After being inactive for over six months from February until her reappearance at the Scottish Open last month, Maguire has a busy time ahead which also includes another Major, the KPMG PGA in Pennyslvania next month.

20/21 - Since 2012, South Korean golfers have won 20 Major championships . . . . just one less than the rest of the planet combined: Mirim Lee’s win in the ANA Inspiration marked her first Major championship success, after she chipped in for eagle on the 72nd hole and then defeated Brooke Henderson and Nelly Korda with a birdie at the first hole of a sudden-death play-off with. Lee’s approach shot was headed for the water hazard on the final hole of regulation until stopped by a temporary structure. “I think I had a little bit of luck that helped me.”

“Dad, your tangibles are really, really good right now; like, the set of clubs we’re playing with, the ball, everything, the tangibles are really good. You just take care of the intangibles” - Reagan Cink, caddying for his dad Stewart, in walking off the second green of the final round of the Safeway Open. Cink (at age 47) shot a final round 65 for a total of 21-under-par 267 to secure his first win since the 2009 British Open.

“Well I’m just pleased that down the stretch Michael didn’t beat arguably the best player the games seen around one of America’s classic @usopengolf venues!! Or that would’ve been really underwhelming!!! (That’s English sarcasm FYI) - Lee Westwood jumping to Michael Campbell’s defence after the Kiwi’s 2005 US Open was deemed one of the most “underwhelming” by Golf Digest magazine.

“He took down Tiger in his prime in 2005. Explain to me how that is underwhelming?? If anything it is one of the best stories in golf in the last 20/30 years” - Gavin Moynihan giving his tuppence worth.

“After a lovely meal and a few drinks the “2005 underwhelmed US Open trophy” really opened up to me and said, Michael, I don’t care what people say, you are the one for me” - Michael Campbell himself having the last word (and laugh) on the subject.

Vijay Singh had more problems with the weather than the rest of the field as he claimed the John Deere Classic, the 14th of what would be 34 career wins on the PGA Tour. The tournament was dogged by heavy rain, which forced it to a Monday finish where the Fijian birdied three of his closing five holes for a 65 and a 72-holes total of 16-under-par 268. It gave him a four stroke winning margin over Chris Riley, Jonathan Byrd and JL Lewis, who had started the final round tied with Singh.

“If I’m in the lead and playing well, I just have no worries of what can go wrong. I just go out there and play and trust the way I’m playing and hit the ball where I am aiming . . . . I felt like I had control over the game, control over where the ball was going to go,” said Singh, who moved to the top of the PGA Tour money list for the season with the win, his third of four that year.

After playing her shot from a greenside bunker, and leaving herself with a tap-in putt, Player A approaches the ball - still with the sand wedge in her hand - and reverses the club to finish out with the back of the wedge. Is this allowed?

1 Tour de France: Every yellow jersey winner must feel guilty by some association
2 Kevin Babington: Learning to live again after life changed forever on Long Island
3 Matt Williams: The sky is not falling in on Irish rugby - but Ireland do need a new plan
4 Clifford brothers to the fore as East Kerry retain title
5 Where is George Gibney? - Mark Horgan on his quest to find out
Real news has value SUBSCRIBE