McIlroy and Rose set to take on Woods and Thomas, what’s in Bryson’s US Open bag 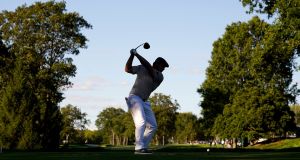 The further the better for DeChambeau

As a game-changer, Bryson DeChambeau is leaving his own trademark on the evolution of golf. For sure, the latest US Open champion - bulked up beyond compare with the skinny, lanky lad who played for the USA in the Walker Cup of 2015 - has done things his own way, not just with his body but with his equipment.

And while the use of one length irons through his bag is what initially raised doubting eyebrows, The Scientist’s experimentation with longer-shafted drivers is unquestionably a work in progress as he intends to start using a 48-inch driver in practice in the coming weeks in his quest for additional distance.

The average length of a driver used on the PGA Tour is 44.5 inches, while DeChambeau used a 45.5 inch shaft on his Cobra King SpeedZone driver on his way to destroying the field - and the course - at Winged Foot.

“Next week I’m going to be trying a 48-inch driver. We’re going to be messing with some head designs and do some amazing things with Cobra to make it feasible to hit these drives maybe 360, 370 (yards), maybe even further,” said DeChambeau.

As if he weren’t already driving them far enough?

“I think I’m definitely changing the way people think about the game . . . and I think the next generation coming up into golf hopefully will see this and go, ‘hey, I can do that too’.”

A fourball to savour

In different circumstances, the teaming-up of Rory McIlroy and Justin Rose to take on Tiger Woods and Justin Thomas could have been one of those mouth-watering fourballs at the Ryder Cup which was originally scheduled for this week but pushed back a year due to the coronavirus pandemic.

Still and all, the four players will still get to go head-to-head in an 18-hole charity match on Tuesday to benefit the Payne Stewart Family Foundation: the Europe-USA styled match takes place at Payne’s Valley Golf Course in Ridgedale, Missouri. the new public course was actually designed by Woods, who has been developing that side of his business.

“I couldn’t be prouder of how it has turned out,” remarked Woods of his design which has an additional 19th hole (a Par 3 designed by the owner Johnny Morris), while the route from the final hole takes golfers along a nature trail atop a cliff and then through a nature cave system to return to the clubhouse.

The charity match will raise funds for the Stewart Foundation, which supports a number of initiatives including Kids Across America and the First Tee. Sky Sports are featuring live coverage (starting from 8pm Tuesday).

39.6% - How hard was it to hit a fairway in the US Open at Winged Foot? Well, the 39.6 percent hit by the field was the lowest percentage in the US Open since data started being tracked, and was also the lowest in any 72-hole event on the PGA Tour over the last 30 years!

“I don’t really know what to say because that’s just the complete opposite of what you think a US Open champion does. Look, he’s found a way to do it. Whether that’s good or bad for the game, I don’t know, but it’s just not the way I saw this golf course being played or this tournament being played. It’s kind of hard to really wrap my head around it” - Rory McIlroy’s take on how Bryson DeChambeau (who hit only four of his last 21 fairways) outmuscled Winged Foot to claim the US Open.

The cool, calm and collected Swede Henrik Stenson made his own history when he became the first European winner of the Tour Championship on the PGA Tour, scooping the jackpot payday of $11.4 million. Although a 20-year-old young gun by the name of Jordan Spieth and veteran Steve Stricker were cast as pursuers, Stenson - who’d started the final round four shots clear - finished with a closing 68 for a winning total of 13-under 267, three strokes clear of Spieth and Stricker.

“I’m speechless, it was a tough day and to hang in there the way I did, I am really satisfied . . . It hasn’t sunk in yet. I had to fight hard mentally to keep all this aside, and I managed to do that. It’s going to feel better as the week goes on, I’m pretty sure about that,” said Stenson.

“Austrian Golf Federation just called me and told me they were gonna give me my amateur status back after the last two tournaments in Valderrama and Winged Foot. Now playing off Hcp 5 “ - a self-deprecating Bernd Wiesberger after his recent outings, where he failed to better par in any of the eight rounds.

Currently 7th reserve for the @DDFIrishOpen - really hoping the list falls but not too optimistic. As a @EuropeanTour member and proud Irish professional it’s disappointing to be in this position #fingerscrossed - Niall Kearney, who didn’t manage to get an invitation, on waiting in hope to get into the field at Galgorm Castle.

“Wow Win #2” - England’s Georgia Hall after defeating South African Ashleigh Buhai at the second hole of sudden death in the Portland Classic, a tournament in Oregon reduced to 54-holes due to safety concerns over smoke from wildfires in the state. Leona Maguire finished in tied-28th, which put her in 54th on the updated order of merit, one position ahead of Stephanie Meadow who missed the cut in Portland.

Q In a matchplay match, Player A’s putt stops just short of falling into the cup and is overhanging the hole. Player A is aware that he has 10 seconds under Rule 13.3a to wait to see if the ball falls into the hole. However, before that time has elapsed, his opponent Player B deliberately lifts the ball. What is the ruling?