Brooks Koepka: the more equipment testing in golf, the better 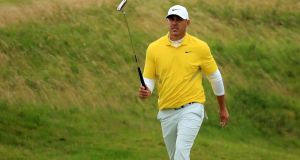 World number one Brooks Koepka would welcome more equipment club testing during the season in the wake of Xander Schauffele’s row with the R&A at Royal Portrush.

Schauffele accused the game’s governing body of trying to “ruin my image” by allowing news to come out that his driver had been found to be non-compliant ahead of the first round of last week’s Open Championship.

The former PGA Tour rookie of the year has since said he does not believe the R&A had leaked the information and claimed the door to the testing facility was open while his driver was being checked, while he has also spoken to the player who jokingly called him a cheat.

Speaking in his pre-tournament press conference ahead of the WGC-FedEx St Jude Invitational, Koepka said: “The more testing the better. It’s like anything, drug testing, driver testing, anything.

“I don’t see any problem with it, it would be good for the game. I think it’s a great idea.”

Koepka has made the trip to Memphis after last week’s Open, where he was attempting to become the first player to finish in the top two in all four majors in a calendar year.

The four-time major winner had to settle for a tie for fourth and becoming the fifth player to finish in the top five at all four majors in the same season, joining Jack Nicklaus, Tiger Woods, Rickie Fowler and Jordan Spieth.

“I don’t really think about it too much, it’s kinda already over with,” Koepka added.

“I won two times last year (in majors) and once this year so obviously last year was a little better, I just look at it that way. My expectations are definitely there to win every time.”

The top 10 in the FedEx Cup standings at the conclusion of the PGA Tour’s regular season next week will share a $10million (€8.9m) bonus pool through the Wyndham Rewards Top 10 program and Koepka is currently in pole position to win $2million (€1.8m).

However, his lead at the top of the standings over Matt Kuchar is just 37 points — with Rory McIlroy another 115 points adrift — and Koepka has not ruled out adding next week’s Wyndham Championship to his schedule to try to seal top spot.

“If I do what I’m supposed to do this week and win, then everything takes care of itself,” he added. “But there is a possibility that next week you could be out there and playing for a lot, so we’ll see.”

This week’s event effectively has two defending champions, with Justin Thomas winning the WGC-Bridgestone Invitational last year before it moved from Firestone Country Club to TPC Southwind, the long-time venue of the FedEx St Jude Classic won by Dustin Johnson in 2018.

“I would probably call him the defending champion,” Thomas said. “I’ve never played here in my life and he won the tournament here last year.

“I don’t think it’s going to have any impact on who plays better this week, but he can have it if he wants it. I’m not losing any sleep over it.”

Ireland’s Shane Lowry withdrew from the event after his Open triumph on Sunday.