Wake up ESPN: Trump has made everything – even sport – political 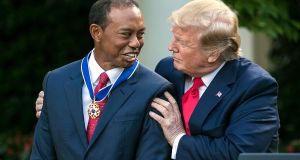 US president Donald Trump presents Tiger Woods the medal of freedom during a ceremony in the Rose Garden at the White House. Photograph: Getty Images

The morning after US president Donald Trump’s rally in North Carolina last week, Dan Le Batard took to the airwaves for his daily sports talk show on ESPN Radio.

Like many sane and rational individuals around the country, Le Batard had been disturbed by the sights and sounds of a frenzied mob chanting “Send Her Back” about Ilhan Omar, the remarkable child refugee from war-torn Somalia who now represents a Minnesota district in Congress. As the son of Cuban parents who fled Fidel Castro’s oppressive regime as teenagers, he couldn’t let what he had witnessed pass without comment.

“So what happened last night, this felt un-American,” said Le Batard. “There’s a racial division in this country that’s being instigated by the president.”

Nothing too outrageous there, and a sentiment being expressed at water coolers across America that particular day, Le Batard’s first mistake was to make his point on ESPN, his second was to compound matters by railing against his employers.

“And we here at ESPN haven’t had the stomach for that fight because Jemele [Hill] did some things on Twitter, and you saw what happened after that,” he continued. “Then, here, all of a sudden, nobody talks politics on anything unless we can use one of these sports figures as a meat shield in the most cowardly possible way to discuss the subject.”

Le Batard is paid around $3 million a year to bloviate on radio and television every day by ESPN but the self-styled “worldwide leader in sports” has prohibited its on-air talent from uttering any political opinions. At all. Jemele Hill, an African-American, was bought out of her contract last year after tweeting that Trump is “a white supremacist” and “the most ignorant, offensive president of my lifetime”. Her departure was regarded as a warning to her peers that the suits were serious about wanting talk of home runs not homeland security.

“Without question our data tells us our fans do not want us to cover politics,” said Jimmy Pitaro, president of the network. “My job is to provide clarity. I really believe that some of our talent was confused on what was expected of them.”

The original no-politics policy was put in place early in the Trump presidency when the impression grew that the network was becoming overly political and, in particular, too left-wing. Among the instances cited as alienating the Make America Great Again (MAGA) constituency among their viewership was broadcasting Michael Sam kissing his boyfriend at the NFL Draft and Caitlyn Jenner (once the world’s greatest athlete) receiving the Arthur Ashe award for courage at the ESPYs, their very own sporting Oscars.

Never mind that those two ground-breaking sports stories predated the 2016 election, they were somehow regarded as evidence of a creeping progressive agenda. Many were quick to deduce this was also a significant part of the reason ESPN has haemorrhaged 15 million subscribers since 2011. Inevitably, Trump was among those to erroneously link the shedding of viewers with the network’s perceived political bias against him and his kind.

In fact, those losses had far more to do with the phenomenon of cord-cutting where people are moving away from expensive cable television contracts to go a la carte with the various streaming services. Witness the two million homes who cut ESPN since the ban on employees expressing opinions about serious matters.

Still, Le Batard was reportedly carpeted by the ESPN higher-ups following his comments. He missed his radio show last Monday and, despite recently inking a new four-year contract, his future at the network has been called into question. Whatever happens there, the latest incident brought the network’s stance into renewed focus and reopened a serious philosophical debate. There is a sense Le Batard and others feel that ESPN is shirking its social responsibility because, arguably since that moment on the campaign trail when he claimed “there were no good Muslim athletes”, Trump has made everything suddenly political.

Certainly, the days when sport was regarded as the toy department, the light relief from the real world, are long gone. LeBron James, Megan Rapinoe and a whole host of others have regularly lambasted Trump and his divisive policies. The first question any championship winning team in America is now asked is whether they will visit his White House and pose for photos in the Rose Garden. With so many rejecting what used to be regarded as a singular honour, the president counters by exploiting every athlete willing to associate with him (hello Tom Brady, Rory Mcllroy, Tiger Woods) to try to normalise his regime.

The problem is that the new normal is not normal at all. America has an end of days feel to it at the moment. A troubled place where the country is no longer divided between Democrats and Republicans but, in a way that often crosses traditional party lines, between sentient humans and the amoeba slinking after Trump and wallowing in the hatred he spews. Stark as it may sound, there are those who want to be on the right side of history and those who will eventually be judged to have collaborated with the darkest regime.

Times have changed. The accomplished men are calling out the failures. All over the place. Except on ESPN.