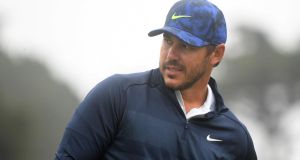 Brooks Koepka is bidding for a third-consecutive US PGA Championship in San Francisco this week. Photograph: Harry How/Getty

A confident Brooks Koepka said on Tuesday he had ironed out the kinks that hindered his game earlier this year and added that he will claim a third-consecutive PGA Championship this week if he plays at the level he is capable of.

Koepka would become the only player to hoist the Wanamaker Trophy three years in a row since the tournament switched from being a matchplay event to a stroke play event in 1958.

“I feel very confident in myself,” he said at TPC Harding Park in San Francisco.

“I don’t put any expectations on myself. Just go out and play golf exactly like I know how and, if I do that, then yeah I probably should win.”

In the weeks leading up to the tournament few gave the 30-year-old much of a chance as he struggled with left knee soreness after the PGA Tour resumed in mid-June but the American came alive in Memphis last week to finish tied for second place.

The four-time major winner and former world number one said he was more comfortable playing on the sport’s biggest stages because he thrives under pressure.

“The way the golf course sets up eliminates pretty much half the guys, and then from there half of those guys probably won’t play well,” he said.

“Then from there I feel like mentally I can beat them, the other half, so you’ve probably got ten guys. That’s the way I see it.”

Koepka said he cannot wait to attack TPC Harding Park, where the thick rough and narrow fairways reward accuracy off the tee.

“I’m excited. This is a big-boy golf course. Got to hit it straight and put it in the fairway. It’s going to be quite long,” he said of the 7,251 yard par-70 municipal layout, which is expected to experience cooler temperatures this week.

“I think it kind of plays into my hands.”

Koepka will be grouped with last year’s US Open champion Gary Woodland and the 2019 British Open winner Shane Lowry on Thursday and Friday at the first major of the year, which is being played without fans due to coronavirus.