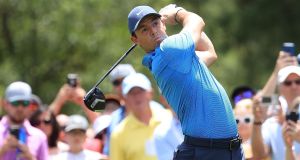 Dustin Johnson is looking over his shoulder at four possible usurpers to his world number one crown heading into The Players Championship at TPC Sawgrass with Justin Thomas (the man most likely), Jordan Spieth, Jon Rahm and Justin Rose all having a mathematical chance of leapfrogging him into top spot.

That Rory McIlroy doesn’t figure in such permutations – having slipped back to eighth in the latest world rankings – will likely rankle with the Northern Irishman, but you’d suspect an overdue win on the Pete Dye-designed course, one where he has had a Love/Hate relationship throughout his career, would provide adequate compensation.

For McIlroy the course, one which requires that the strongest club in his bag, the driver, to be ignored for much of a round in favour of a two-iron, has taken some getting used to: indeed, he missed the cut with regularity on initial acquaintance and it was only from 2013 on that he has managed to get any payback from the demand for patience.

McIlroy has been grouped with Thomas and Spieth for the opening two rounds this week, which at least provides a familiarity as he goes about his task. In fact, Spieth - who has missed the cut at Sawgrass on his last three appearances - is another who has found the Dye track a challenge.

Only two Irish players have made it into the 144-man field: McIlroy and Shane Lowry, who is playing out the third and final year exemption for his WGC-Bridgestone Invitational success in 2015. Lowry, too, has had his issues with negotiating a route around the course and has failed to make the weekend on two of three attempts.

Lowry’s season has yet to ignite and his positioning of 168th in the latest FedEx Cup rankings provides confirmation of that. The Offalyman is scheduled to come back to this side of the pond for the upcoming BMW PGA Championship at Wentworth but will then likely return Stateside for the Memorial in his search for more FedEx Cup points. Of course, a good performance – and especially a win – would take all that sort of pressure away from his scheduling.

McIlroy left Quail Hollow with a mixture of frustration with the topsy-turvy nature of his scoring – 68-76-66-71 – but also a degree of optimism about the immediate future and an observation that he knows what needs fixing in the coming days.

A win at Sawgrass could propel McIlroy back as high as number three in the world rankings, but others are after the number one spot occupied by Johnson with Thomas the man in prime position to challenge. Theoretically, Thomas could even miss the cut and move to number one depending on what happens to other players.

Rose can only jump to number one with a win, while Rahm and Spieth need at least a solo second place finish.

Day’s return to the winning podium – his second of the season, having also claimed the Farmers Insurance Open in January – moved the Australian up to seventh in the world rankings and he too has his eye on that world number one position again but is also eyeing up further glory in the Majors.

“Ever since I was a kid, even more so than like Major championships, I always held number one, as many of you know, above those for some reason. Just in my mind, I thought that was the best thing ever. Getting back to it, when you’re walking around and there’s so many golfers in this world and you know that there’s no one better than you, that’s a pretty awesome feeling.

“I know the feeling and what it felt like to be number one and I know what I had to do to get there. (The Wells Fargo win) is a good kick in the right direction having two wins this kind of early in the season. My next step is to try to win a Major this year. It would be nice to be able to capitalise on the good play, and if I can do that, hopefully the US Open comes around nicely for me,” said Day of his upcoming goals.