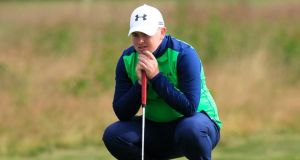 Dundalk’s Caolan Rafferty, who finished 14th in the Lytham Trophy at Royal Lytham and St Annes.

With three subpar rounds, including a final round four-under 66 that matched the low round of the tournament England’s Matthew Jordan blitzed the field to win the Lytham Trophy by nine shots at Royal Lytham and St Annes.

Jordan with rounds of 67, 69, 70 and 66 for 272 was the only player under-par for the week. In the final round Jordan got off to a perfect start with a birdie on the first and never looked back carding five birdies overall against just one blemish on the par-four 15th.

He fired a 66 in the third round to tie for the 54-hole lead on four-under-par with Balbriggan’s Robbie Cannon, who had shot an eight-under-par, course record 64 to lead by one stroke on two-under after 36 holes.

In the final round, Fahy turned in level par to remain tied with Cannon he birdied the 16th and 18th for a closing 70 to set the target at six-under 282.

Cannon birdied the 12th, 13th and 15th but as he chased a birdie in his last three holes for overall victory, he lost a ball at the 17th and made a triple bogey seven for a disappointing 73, leaving him alone in fourth on three-under.

Warrenpoint’s Ryan Gribben closed with a 66 to finish second, tied on four-under with Waterford’s Eanna Griffin, who shot a 69 in the final round.

Wales title for McCook in playoff

McCook (71, 70, 71) and Lamb (69, 74, 69) had 54-hole totals of seven-under 212, finishing six strokes ahead of the three players who shared third place on 218, Scot Chloe Goadby, another English Curtis Cup selection Lily May Humphreys and Thalia Kirby (Harleyford).

McCook, the overnight leader by two shots, was pegged back by Lamb over the outward half of the final round, McCook taking 34 shots to Lamb’s 32.

McCook then birdied the 10th, 12th and 13th to regain the lead but opened the door again for her rival by taking a double bogey six at the 14th and bogeying the 18th, coming home in 37 for a 71.

But McCook prevailed in a sudden death play-off for one of the best wins of her amateur career.

But there was no stopping them in the final as Ronan Cowhey, Cathal French, Rory Reid, Robert Abernethy, Shane Brosnan and Robert O’Callaghan led their school to victory

Edmondstown’s Evelyn Park claimed the Golfer of the Year Trophy after the final event of the East Leinster Junior Winter Series at Powerscourt Golf Club.

Five players were in contention for the overall honours, but it was Park who took the top prize with Chloe Maples Gaffney (Royal Tara), Nicola Lynch (Malahide) and Niamh Carroll (Royal Tara) claiming the class prizes.

The winter series is organised by the East Leinster Junior Development Committee, which runs 18-hole stableford, 9-hole stableford and 6-hole scramble competitions every month over the winter.

Dungannon’s Dwayne Mallon followed a 72 on the Sandy Hills Links with a 69 on the Old Tom Morris Links to win the McGinley Motors sponsored Rosapenna Senior Scratch Cup.

He finished one stroke clear of Malone’s Matthew McClean and County Sligo’s Ruairi O’Connor on two-under 141.

Gweedore’s Pol O Maolagain won the Junior Scratch Cup by six shots on 10-over 153 from Vaughan Valley’s Paul Duffy with Rosapenna’s Enda McMenamin third on 160 and Paul Daly fourth with 161.

Rory Leonard and Michael Ryan shot 68s in the first round to lead the Senior Scratch Cup by a shot from Stefan Greenberg and O’Connor with Niall Carroll carding a 71 and 72s for Dwayne Mallon, Kealan Quigg, Jack Madden, Matthew McClean, Owen Crooks and JJ Logue.

Showers sprinkled the afternoon play on the par-71 Old Tom Morris Links but it was Mallon who emerged victorious, carding a two-under 69 to claim victory by a shot from Balmoral’s Matthew McClean on two-under 141.

A place in the Challenge Tour’s NI Open at Galgorm Castle will be up for grabs at July’s NI Amateur Open.

Sponsored by Specsavers Ballymena and Srixon Cleveland, a 77-strong field will tee up in the 36-hole event at Galgorm Castle on Tuesday, 18 July, just one week after the North of Ireland Championship at Royal Portrush.

This means winning the NI Amateur Open is a rare opportunity for the 2018 champion to test their game against the best professionals in Europe.

The NI Open takes place at Galgorm Castle from August 16-19 and will be one of the standout events on the European Challenge Tour.

Douglas’ Sara Byrne missed the cut but tied for ninth in the girls’ event behind Scotland’s Louise Duncan with Aine Donegan tied 14th.

McDermott charges to victory at The K Club

Brady, the recent winner of the Moran Cup, opened the tournament with a six under par 66 to lead alongside Richard Kilpatrick (Banbridge Golf Club). McDermott, meanwhile, was handily placed after the close of play on day one, just a shot back.

Overnight leader Brady couldn’t match McDdermott in round two, posting a two-under par 70 while Kilpatrick’s one over 73 saw him slip into a tie for fourth.