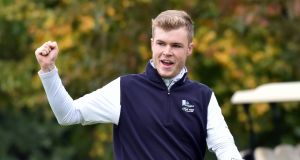 Louis O’Hara (Athenry) celebrates holing a 35 foot putt on the 16th green in the final of the Barton Shield the AIG Cups and Shields Finals at Thurles Golf Club. Photograph: Pat Cashman

Serenaded first by The Fields of Athenry and then swallowed in the embrace of friends and family, the Athenry golfers and their caddies, who won the Barton Shield for the first time in the club’s history, paused briefly to douse each other in champagne before a voice from the entourage pleaded with them not to waste the good stuff.

The exuberance was understandable. Teenagers Darren Leufer (16) and Boys international Allan Hill (18) had helped the club to win the Fred Daly Trophy last year but this was a first men’s national pennant at the AIG All Ireland Cup and Shields.

It was achieved against a backdrop of formidable opponents in Dundalk and without their best player, David Kitt, currently representing Ireland in Buenos Aires at the Youth Olympics; he received the first phone call from the edge of the 18th green.

The genesis of Athenry’s success came in the top match where Joe Bernie Jnr and Louis O’Hara, four up and striding down the 18th fairway when Dundalk finally ran out of holes, as Hill and Leufer’s half on the 17th effectively ended the contest.

Athenry team captain Michael Lane admitted: “Absolutely thrilled, I’m lost for words to be honest. It’s our first time ever winning a men’s senior event. I said earlier on that 20 years ago we couldn’t even field a Barton Shield team, now we have top players and that’s a testament to the junior convenors over the years and the likes of Declan Cunningham and Sean Whelan and the work they have put in with the juniors.

Joe Bernie Jnr, no more than myself, is not a young man and he battled and battled there and he did the business. It’s brilliant. The ball doesn’t know what size you are or what age you are. They are a credit to their families and the club.”

It wasn’t a facile victory as Dundalk’s Irish international Caolan Rafferty and Eoin Murphy kept plugging away but just couldn’t escape the clutches of Hill and Leufer sufficiently to claw back the deficit in the top match.

Hill said: “We went three down after five holes but we stuck in there and tried to get a few holes back.

“We got back to all square after nine and one up after 10. That was the turning point and then they came back at us with birdies at 15th and 16th but we put in a solid finish and made par to win (the match overall). I am from Roscommon and Darren is from Tuam. It’s a great club overall and the support we get is fantastic.”

If Athenry’s win was underpinned by youth then Nenagh’s victory over Athlone in the day’s other final, the Pierce Purcell Shield, emphatically proved that age is not a barrier to success. There were five old age pensioners in the Nenagh team, including two Packie Ryan and Toddy Hogan in their 70s. It’s the second time that they have won this national title in two years, and the eighth consecutive victory by a Munster club.

Team captain Paddy Peters summed up the win. “To win an All Ireland no matter what your sport is, it’s fantastic for the club. Five of the team are drawing the old age pension. It’s our fifth Pierce Purcell. Thurles were more than good to us. They invited us over for a practice and it was a hell of a match, the hardest we had.

“We have a great winter league going with as many as 150 playing in it, all matchplay. Your throat could be cut in it, it’s so competitive. A lot of our achievements in matchplay come from that.”

Hermitage and Kinsale came through two tightly contested Jimmy Bruen semi-finals with the Dublin club’s fourth pairing of Richard Gladney and Louis Hemeryck, finishing birdie, par, par to come back from one down and claim the decisive point.

Peter O’Mahony signs new deal with Munster and IRFU to 2023 10:54
Man United could stop Bruno Fernandes from playing for Portugal in March 09:31
Another stalemate for Man United; Robbie Henshaw leading the way for Ireland 07:54
Continued absence of anti-doping tests for GAA intercounty elite 06:44
Irish contribution to Ali-Frazier bout that brought the planet shuddering to a halt 06:00
Here is your handy guide to sport on television this week