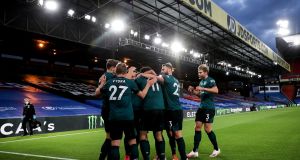 It’s a debate that looks like rolling on for a while more yet as World Rugby look to create a global calendar and have both hemispheres playing at both times, but this morning Gerry Thornley argues in his column that the idea of playing summer rugby goes against a lot of the history of the sport. The proposal has caused consternation among clubs with Leinster and Munster CEOs, Mick Dawson and Ian Flanagan, both expressing their opposition to it. “When you think of it, there’s a reason rugby has been played through the winter for the century and a half or so of its existence,” he writes. That’s not the only debate waging in rugby at the moment as the IRFU remain intent on getting players to take a 20 per cent pay cut while the players themselves and their union are fighting their corner. “Despite heated exchanges during the previous meeting, the IRFU has granted RPI access to their accounts to ensure both parties have a clear idea how much of a salary reduction the players must eventually accept,” reports Gavin Cummiskey.

On to soccer and the ongoing discussions over when the Airtricity League will return to play which, seemingly, may become clearer at the end of today. With all of the other most contentious issues – namely money, the timing of the season’s conclusion and a format and schedule that allowed for the playing of the FAI Cup – apparently resolved, the National League Executive Committee will hopefully decide on Tuesday morning which of the four format proposals to adopt for when the league restarts. In England, Ole Gunnar Solskjaer believes Manchester United can go the rest of the season unbeaten as his side prepare to face Brighton tonight. United made it 14 games without a loss when they saw off Norwich on Saturday and Solskjaer reckons they can maintain that good form. Meanwhile, in Germany, Irish international Claire O’Riordan is keen on securing new forward role with Duisburg next season as she becomes hard-wired into the realities of Bundesliga survival. O’Riordan’s side beat Jena 2-0 at the weekend in the final match of the campaign to maintain their top-flight status.

1 Covid-19: Restrictions on travelling abroad may last several years, expert warns
2 Dublin has crowd-free weekend as pubs long for July 20th restart
3 Maureen Dowd: Biden has his limitations but he’s no Trump
4 Taoiseach urges British people not to holiday in Ireland at present
5 Keith Duggan: Bubba Wallace tweet shows just how troubled Donald Trump’s mind is
6 This Connemara coastal home will blow you away
7 Cluster of Covid-19 infections at Kerry ‘house party’ investigated
8 Forget bulging muscles; strength is all about nerves
9 Off the charts: why this paint colour is Instagram's favourite
10 50 best Irish albums of all time – in order
11 Jack Charlton’s own grievances endeared him to Irish fans
12 Anne Enright: ‘Nuala O’Faolain was an impossible person, to whom we owe so much’
13 My marriage is boring and polite. How do I make my husband interested in me?
14 Thandie Newton names names. Will Hollywood punish her?
15 If international visitors are pariahs should we not be testing them on arrival?
16 Garda Ombudsman asked to investigate Barry Cowen leaks
17 Taoiseach warns against being ‘overly judgemental’ of SF funeral attendance
18 ‘Jack used to call me his official grasshopper keeper. We had a great time’
19 Warning of serious brain disorders in people with mild coronavirus symptoms
20 The things the Taoiseach doesn’t talk about in public
21 Paschal Donohoe’s victory seen as a revolt against EU’s ‘big four’
22 Coronavirus: Cases surge in southern US states as Italy and Germany hold steady
23 Reopening of pubs that do not serve food may be delayed beyond July 20th
24 Many politicians remaining silent over online personal abuse
25 David McWilliams: The Pandession is destroying Ireland’s Craic Economy
26 Brightest comet of the century visible in Irish skies for the next week
27 Man (30s) arrested over fatal hit-and-run in Co Tipperary
28 Bonfires lit in loyalist areas of North despite Covid-19 restrictions
29 Trump wears face mask in public for the first time
30 John Malkovich: ‘I know what I like, and I do what I like’
31 Dave Hannigan: Notre Dame’s Fighting Irish leprechaun needs its ass kicked
32 Ross O’Carroll-Kelly: ‘You see, the 50-person limit has made Mass tickets a hot commodity’
33 Gardaí seek public help over missing woman in Gorey, Co Wexford
34 Can Grafton Street stop the flood of closures?
35 It’s time to end the Airbnb effect on Dublin’s housing supply
36 Belgium helps Ireland to a Brexit boon
37 The Gael Becomes Irish: the prospects for the Irish language in Ireland today
38 Coronavirus: Number of tests carried out in State exceeds 500,000
39 Varadkar to meet banks in row over interest on mortgage payment breaks
40 Fintan O’Toole: In the US, the 19th century is coming to a very slow end
Real news has value SUBSCRIBE