Rory McIlroy: ‘It sort of sucks going off in the middle of the pack on a Sunday’ 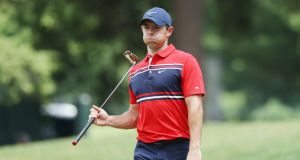 Rory McIlroy reacts on the sixth green during the final round of the Travelers Championship at TPC River Highlands in Cromwell, Connecticut. Photograph: Maddie Meyer/Getty Images

Rory McIlroy will aim to find some respite, at least mentally, in his time spent at home in Florida before resuming tournament play. That will be at Muirfield Village in Columbus, Ohio; and the only question is whether it will be for the Workday Charity tournament, or the following week’s Memorial tournament on the same Jack Nicklaus course.

After finishing a third week straight of competition with further disappointment at the Travelers in Connecticut, the world number one spoke of frustration with his game and more pertinently with his on-course decision-making and shot-execution since the PGA Tour’s resumption. In that three-week stretch, the Northern Irishman failed to garner a top-10 finish, totally at odds with how he had played before the Covid-19 pandemic caused a 12-week break in the calendar. Prior to the stoppage, he hadn’t featured outside the top-five in four starts.

“I’ve made too many mistakes, too many bogeys, too many loose shots,” said McIlroy in identifying the difference between his early-year form and how he has returned, adding that he felt in need of a mental break and which explained the uncertainly on the length of time needed away to get his head space in the right place, a one-week break to the Workday, or a two-week break to the Memorial.

“I’ve been frustrated on the course the last three weeks, not being sort of in contention, and it sort of sucks going off in the middle of the pack on a Sunday, knowing that you don’t really have a chance,” said McIlroy of intending to spend his time away from tournament play on the golf course and getting his feel back.

What is certain is whenever that return to play happens, McIlroy faces renewed competition to hold onto his world number one spot with Dustin Johnson, winner of the Travelers for his first win on tour since the WGC-Mexico some 15 months ago, repositioning himself to challenge again for the top position on the rankings.

In his career, Johnson has had five separate stints as world number one – firstly in February 2017 and most recently holding the position in May 2019 – and, fully healthy again following arthroscopic surgery to repair cartilage damage last September, can renew rivalry for that battle with McIlroy. Johnson’s win in Connecticut elevated him to third, with Spain’s Jon Rahm, between him and McIlroy.

Johnson’s latest win, the 21st of his career on the PGA Tour, has seen him win at least once every season – he didn’t actually win in the 2014 calendar year with his win that season coming in November 2013 of the 2013/2014 wraparound season – and that consistency has been the bedrock of his time towards the top of the rankings.

“I feel like I’ve put in enough hard work to where my game should be spot on all the time,” said Johnson of returning to the winner’s enclosure. “Obviously, coming off of an injury, or surgery last [autumn], and then only playing a couple of tournaments before our shutdown, I didn’t really get a lot of golf back in a rhythm,” he said. It took just three weeks into the return to find that winning rhythm.

Séamus Power – who has missed the cut on the Korn Ferry Tour the past two weeks – gets an opportunity to player on the PGA Tour this week, getting into the field for the Rocket Mortgages championship at Detroit Golf Club. He is the sole Irish player in the field, with Shane Lowry joining McIlroy on the missing list until resuming play in Ohio.

The PGA Tour has further strengthened its coronavirus protocols for this latest tour stop in Detroit where there again will be no spectators on site. The tightening comes at a time when South African Dylan Frittelli became the latest player to test positive for the virus, as he prepared to take the tour chartered flight from Connecticut to Michigan. Frittelli became the fourth player to test positive, adding his name to those of Cameron Champ, Denny McCarthy and Nick Watney, who were all obliged to go into isolation, with Harris English joining them on Monday after the Tour announced a fifth positive test.

1 Mary Hannigan: ‘Bitches Who Stood’ might be better viewed as useful allies
2 James Cronin anti-doping case may be reopened
3 America at Large: Deafening silence after anti-Semitic spewing
4 Game Changers: Living beyond fear puts Alex Honnold above all others
5 ‘Everyone would play tomorrow if we could’ - Johann van Graan
Real news has value SUBSCRIBE

‘Everyone would play tomorrow if we could’ - Johann van Graan 13:36
My pay cut is no sacrifice in current climate, says England coach Eddie Jones 12:21
Mikel Arteta calls gap between Arsenal and Liverpool ‘enormous’ 09:06
England drop Jofra Archer after ‘breach of the team’s bio-secure protocols’ 08:55
Tributes paid to former Cork GAA star Kieran O’Connor 09:52
Here is your handy guide to sport on television this week