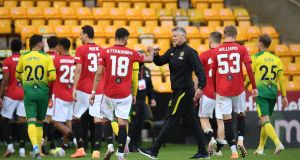 Ole Gunnar Solskjær believes Manchester United can go unbeaten until the end of the season to set comfortably their longest sequence without losing for a decade but warned complacency could cause them to be kicked where “you don’t want to be”.

United are at Brighton on Tuesday where they will aim to stretch their unbeaten run to 15. As they are in the FA Cup semi-finals and the Europa League last-16 Solskjær’s side have potentially 12 more fixtures after Brighton and could move to within two matches of equalling a 29-game undefeated run set from April to November 2010. Since then the club’s longest sequence without losing was 18 matches in 2012-13.

Solskjær was asked whether United could finish the season without another defeat. “The short answer is yes but the long answer is that there’s more to it than that,” he said. “Any Man United team should go into any game against any opposition believing they can win.”

Warning his players to stay focused he added: “Complacency, that kicks you somewhere you don’t want to get kicked in football and any game is a difficult one.”

United are sixth, five points behind fourth-placed Chelsea, having drawn 1-1 at Tottenham and beaten Sheffield United 3-0 in the league since the restart.

The home win against Sheffield United came via an Anthony Martial hat-trick, taking him to 19 goals for the season, the same as Marcus Rashford. Yet despite each striker’s vast improvement, plus 18-year-old Mason Greenwood’s 12 goals, Solskjær warned he was always looking to strengthen.

“You need competition for places at Man United,” he said. “If you think you’ve got a divine right to be playing every game and are doing so well that we’re not going to look for players to replace you, you’re in the wrong place.

“I’ve been here myself for so many years as a striker [from 1996-2007] and Teddy Sheringham comes in, Dwight Yorke comes in, Ruud van Nistelrooy comes in, Wayne Rooney comes in. We’ve always got to look at improving and if they don’t improve we might have to look somewhere else to get better because we have to be better. We’re too far away from where we need to be.”

Solskjær suggested Angel Gomes, a 19-year-old midfielder, could leave. “You can ask Angel why he’s not signed – yet,” he said. “I don’t know what the talks are behind the scenes. Angel’s a top kid. Of course there’s people around him that advise him to do different things. If he doesn’t sign all the best to Angel and I’m going to follow his career. If he signs for us, let’s kick on.”

United have confirmed their goalkeeper Dean Henderson’s loan at Sheffield United has been extended for the rest of the season. – Guardian

Sadio Mané ends Aston Villa’s resistance at Anfield 18:52
Marcus Rashford ‘blessed’ to be fit again and back in the goals 17:57
Matheus Pereira inspires West Brom as they keep in touch with Leeds 17:44
West Ham edge closer to safety despite late Shelvey equaliser 16:50
Enable can’t reel in impressive Ghaiyyath at Sandown 17:01