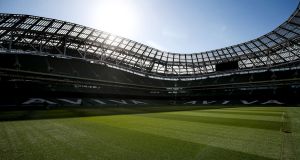 Despite a detailed analysis of IRFU figures by BDO chartered accountants, on behalf of Rugby Players Ireland, the union retains their position of seeking 20 per cent salary cuts across the board.

Round four of talks between the players’ body and the IRFU will take place on Wednesday.

RPI is resisting such a significant drop in salaries due to the players’ inability to reduce their working week to four days – as other union staff members have done – coupled with the short length of a professional athlete’s career.

All the new player contracts come into effect on July 1st but this is not expected to speed up negotiations.

RPI are led by chief executive Simon Keogh but BDO’s managing partner Michael Costello and tax expert Ciarán Medlar, who ironed out Robbie Keane’s recent severance package from the FAI, are also in the room.

Medlar, in an interview last March, noted the IRFU are in “a better position being debt-free on the stadium and having income from the land it sold at Newlands Cross [€25 million].”

Medlar added: “Even if it needed to go down a financial route to sustain the provinces and the central contracts with players it would be in a better position to do so.”

IRFU chief executive Philip Browne and director of finance Conor O’Brien are dealing directly with Keogh and the BDO duo.

Browne has spoken about revenues “falling off a cliff” during the pandemic but private equity firm CVC purchasing a 28 per cent stake in the Pro 14 allowed the union to bank €5.5 million. Also, the Irish Government has promised over €13 million in aid.

Despite heated exchanges during the previous meeting, the IRFU has granted RPI access to their accounts to ensure both parties have a clear idea how much of a salary reduction the players must eventually accept.

This is in stark contrast to the situation in England where Premiership clubs unanimously agreed to cut the salary cap by £1.4 million without informing the players. Leicester Tigers could lose up to 12 of their first team, including a number of England internationals, if they refuse to sign amended contracts by 5pm on Tuesday.

Failure to bring an improved position back to the RPI executive, chaired by Rob Kearney, would undoubtedly escalate the situation.

The players are keen to protect team-mates on development contracts of €18,000 from facing any reductions. In the recent pay deferrals, salaries under €25,000 remained untouched.

Another sticking point is the highest earners, on three-year contracts that earn them close to a million euros, as they would lose a significant portion of the nest egg that softens their difficult transition from professional athlete to a new career post rugby.

To accept the 20 per cent reduction would, in some cases, see them give up a quarter of a million euros.

James Lowe, meanwhile, will emerge from two weeks of self isolation, following a visit home to New Zealand for personal reasons, with a three-year contract that paves the way for him to be capped in November.

Lowe, who has scored 28 tries in 43 appearances for Leinster, previously missed out on All Blacks selection due to injury. He qualifies for Ireland via residency.

Former Leinster coach Michael Cheika is being linked to the latest multi-million euro injection into French rugby. ProD2 club AS Béziers Hérault are undergoing a takeover by a United Arab Emirates billionaire with Cheika the primary target to oversee a recruitment drive that reportedly includes signing two-time world player of the year Beauden Barrett.