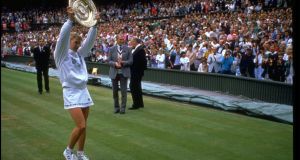 Steffi Graf with the Wimbledon Women’s Singles trophy after beating Martina Navratilova in the final in 1989. Photo: Getty Images

The forehand. It had to be the forehand. With Steffi Graf one point away from the most golden piece of tennis history and Gabriela Sabatini’s second serve there to be hit, Graf took a few quick steps to her left to run around the ball, her footwork as graceful as ever, and took aim. Striking a crushing forehand that a stumbling Sabatini could only frame towards the Seoul stands, the 19-year-old added the 1988 Olympic title to the grand slams she had won that year at the Australian Open, French Open, Wimbledon and US Open. Arguably the greatest forehand any woman has ever possessed had secured the rarest of achievements. No player, male or female, had claimed the golden slam before or has since.

Graf ushered in a new era for the women’s game. Not only did she break the stranglehold of Martina Navratilova and Chris Evert, she led the way for big hitters such as Monica Seles and the Williams sisters, turning up the power on Tour at a time when Boris Becker was doing the same on the men’s side. And just as her fellow German became synonymous with his rocketing serves, so did “Fräulein Forehand” with her most devastating shot. It was a stroke that could have felled a forest. The range was relentless: cross-court, down the line, inside out, inside in, you name it … Graf would clobber it away from anywhere. “Nobody in the world can do what she does,” said Zina Garrison in 1989. “Her forehand puts fear in everybody.”

Almost as terrifying was Graf’s backhand slice, which she knifed down with metronomic precision. It was like a death by a thousand cuts for her poor opponents who would be tortured into making an error – or looping the ball to her forehand, where it would sit up invitingly and be smacked back for yet another winner. She was also a supreme athlete – perhaps the most complete the game has seen – with exceptional balance and footwork. Once her feet touched the court they barely stopped moving. And they moved fast.

She had no airs and graces; hers was a brand of tennis without arrogance

Andre Agassi wrote in his autobiography that his wife had been so quick she trained with the German Olympic athletics team; her coach Pavel Slozil said she could have been even better at running than tennis. There was, literally and figuratively, no catching her.

Her power and pace on court belied her shyness off it. She did not seek the spotlight, she simply wanted to play the game and be the best she could, holding such an intense focus that many in the locker room misinterpreted it as detachment until her demeanour softened towards the end of her career. There was a moment during the 1999 French Open final that summed up her approach perfectly. Close to victory but delayed by Martina Hingis’s histrionics, Graf strode to the umpire and briskly asked: “Can we just play tennis?” Always rushing around court as if there was no tomorrow, she would barely pause for breath between points, let alone argue a line call. She had no airs and graces; hers was a brand of tennis without arrogance.

Graf ripped through the record books with similar urgency. Starting at the 1987 French Open – where she lifted her first grand slam after coming from 5-3 down in the final set against Navratilova to prevail 8-6 – she reached 13 consecutive major finals, winning nine. She held the world No 1 ranking for a record total of 377 weeks during her career. Her all-round game gave her a clinical consistency across surfaces. She remains the only woman in the Open era to have swept to all the slam titles in the same season and the only player in history to have claimed each major at least four times. This was German efficiency at its best.

The one asterisk next to Graf’s staggering statistics was outside her control. Would she have won 22 majors had Seles not been stabbed in 1993? Graf always led the head-to-head against her fiercest rival but Seles, having seen Graf’s power and raised it with double-handed force off both wings, had secured supremacy at every slam apart from Wimbledon in the two years before she was so brutally stopped in her prime. Their match-up could have defined the 90s in the way Navratilova’s and Evert’s had the decade before. Instead Graf, now peerless, amassed 10 of the next 15 majors in a second surge to rival her first, and Seles’s return in 1995 did not halt her.

Graf’s Wimbledon final victory that year over Arantxa Sánchez Vicario demonstrated what a formidable match player she was, especially in the crunch moments. The three sets culminated in a 32-point, 13-deuce penultimate game that passed into All England Club lore. But her fabled fitness was starting to falter – she needed an injection to calm her troublesome back before the match – and she was plagued by injuries late in her career.

Once there was nothing more to achieve, my motivation went... I’ve never looked back

Graf won one more slam after knee surgery, triumphing in that infamous encounter against Hingis at Roland Garros, before losing in the Wimbledon final a month later. And with that, in a move as decisive as one of those forehands, she was done. “I’m not having fun anymore,” she said, fighting back tears as she retired aged 30. Always so assured of her footing on court, she was not going to make the misstep that many champions do by risking their legacy. “Once there was nothing more to achieve, my motivation went,” she said the following year. “I’ve never looked back.” Her timing was perfect right until the end.