The Best Of Times: Roche goes to the limit and beyond in bid for Tour de France glory 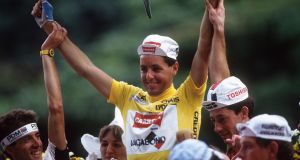 The voice is almost shot already, the madness only beginning to unfold.

Boom, the ski resort seeming to shake as Lauren Fignon of Système U and professor of French cycling wins Stage 21 from Le Bourg d’Oisans to La Plagne, 185km in all, including the hors catégorie climbs of the Galibier and the Madeleine, after six hours, seven minutes and five seconds in and out of the saddle.

“And here now is the start of the drama of today’s stage of the Tour de France,” says Phil Liggett, sitting somewhere close by in his Channel 4 commentary position, his soft Cheshire accent and what’s left of that voice still coming from another time and another place.

It’s late afternoon and the house is hot, and in sittingrooms across the country, these teatime highlights of that July 1987 Tour are being carved into timeless memory, this one in particular.

“What a finish by Stephen Roche, we never knew he was that close. Stephen Roche has ridden to the occasion so, so well. He’s almost caught Pedro Delgado on the line. Surely . . . Stephen Roche is now going to win this Tour de France. ”

All riders talk about days when Grand Tours may not be won, but could definitely be lost, only for Roche that Stage 21, on Wednesday, July 22nd and after three weeks of racing already, qualifies on both counts: closing down Delgado, riding his numbers and his luck, means he doesn’t lose, but he still has to win – and for the final four days that follow the nation and the cycling world are utterly gripped and sold.

Roche finishes just four seconds behind Delgado, fourth and fifth on the stage, while Delgado retains his yellow jersey, just 39 seconds ahead: at what price? Roche promptly collapses off his bike, lying on his back for several minutes, directly below Liggett’s commentary position, while the race doctors administer oxygen and attempt to unravel a silver survival blanket.

Before being assisted into an ambulance, to be driven back to his hotel, Roche is pestered by reporters for some reassuring quote: “Everything is okay,” he says, “mais pas de femme ce soir (but no women this evening)”, words which he says still haunt him. He’s also given a 10-second time penalty for drinking from a non Coca-Cola branded bottle, which prompts Richard Keys back in the Channel 4 studio in London to wonder “what can possibly happen next?” – cueing the synthezised theme music, composed by Pete Shelley of the Buzzcocks, fading off with a gentle ring of Frère Jacques . . .

It would prove one of the longest (4,231km), highest (59 categorised climbs), hardest (strung out over 26 days, with 25 stages, plus a prologue time-trial), closest (eight different riders wore the yellow jersey) and at times hottest and fastest Tour in history: in the first week, Roche joked with reporters that if they continued at this pace they’d arrive in Paris a day early. Only now the final week is a two-man showdown between Delgado, the 27-year-old from Segovia riding for PDM, and Roche, the 27-year-old from Dundrum riding for Carrera.

It would also prove among the more political Tour’s, starting on Wednesday July 1st, in West Berlin, to help mark the 750th anniversary of the West German city, and also highlighting a city wall that would be torn down two years later. Roche is making his first appearance since winning the Giro d’Italia, the other three-week, 3,915km Grand Tour, which didn’t finish until June 13th, and where Roche ends up being spat at by certain spectators with mouthfuls of rice and red wine during his winning showdown with Carrera team-mate and local favourite Roberto Visentini.

The Tour de France, however, is different, the most famous bike race in the world, including America now, after Greg LeMond became the first non-European to win it in 1986 – though absent in 1987 after being shot accidentally by his brother-in-law while hunting turkeys. It’s arguably the most open Tour of the decade, and while Roche is a contender, he’s not the favourite.

Until perhaps Stage 10, the 87.5km time-trail at Futuroscope, which Roche wins by 42 seconds, prompting RTÉ to get a camera grew to France to cover the final two weekends, Des Cahill already providing the evening updates on RTÉ Radio. It helps that Seán Kelly is still in there too, biding his time it seems after being forced to withdraw from the Vuelta a España, four stages short of near certain victory, because of a saddle boil.

Kelly’s luck runs out again, however, on the flat Stage 12 into Bordeaux, when he crashes in a slow bunch-up and breaks his collarbone, leaving the race, weeping, in his Kas team car.

Then on Stage 19 to Villard-de-Lans, the day after the brutal time-trial up Mont Ventoux, where Jean-François Bernard takes a 2:34 lead, Roche takes the yellow jersey, half unexpectedly it seems, after an opportune attack at a feed station. It may be a year before Euro 88, but U2 are already conquering Europe with the Joshua Tree tour and now Ireland has the lead rider in the Tour de France, for only the third time ever, Kelly also wearing the yellow jersey for a day in 1983, 20 years after Shay Elliott first wore it for three days in the 1963 Tour.

Roche does lose it again, without too much of a fight, up Alpe d’Huez, on Stage 20, when Delgado first goes into yellow, and with that sets up the showdown at La Plagne, which at 21km, climbing 1,400m, is in fact longer and higher than Alpe d’Huez.

“It definitely helped me as well that I didn’t have a clue where Delgado was,” is how Roche later recalls that climb, in his book, Born to Ride. “All I was focused on was the clock on the line and thinking that any time that I didn’t lose at the finish was time that I wouldn’t have to regain in the time-trail . . . I wasn’t aware of what was going on around me at that point. I had tuned out everything – other riders, the fans shouting on the side of the road, shouts from my team car.

“All I was thinking about was getting my front wheel over the line, then dragging the back wheel across behind it. I don’t think everyone can push themselves as far as I went that day.”

Even with the 10-second time penalty, Roche, the pure all-rounder, is now confident he can claw back those 39 seconds on Delgado, the pure climber, in Saturday’s penultimate Stage 24, the 38km time-trial around Dijon. He actually helps himself to 18 seconds on Delgado, on Stage 22 to Morzine, and is only 21 seconds in arrears going into the final Race of Truth.

This one also goes out live on RTÉ, Jimmy Magee commentating alongside Pat McQuaid, and with some gentle inclines over the 38km, Roche’s winning ride is never in doubt: riding in his preferred and now vintage toe clips, he takes 61 seconds out of Delgado, regaining the yellow jersey by 40 seconds, with Bernard closing again to take third overall, 2:13 behind, making for the closest three-way finish ever in the Tour until 2007.

They still have to ride the 192km from Créteil to Paris, then 10 circuits down and around Champs-Élysées, where Roche finishes safely in the bunch, arms gently aloft – the then only fifth rider in cycling history to win the Tour and the Giro in the same year. Only he’s not done yet, Roche winning the World Championships road race in September, completing the Triple Crown which only Eddy Merckx has ever done too.

There is perhaps one surprise in Paris that final day, when Roche finds Charlie Haughey standing on the presentation podium, having flown into the French capital that morning, already well familiar with the place from his Charvet shirt shopping.

Recently declared Taoiseach for the third time, in the last single-party government of the state, Haughey busies himself around Roche, his wife Lydia, and three-year old son Nicolas, during the playing of Amhrán na bhFiann, yet can’t quite sneak his way into the front page picture which appears on the following morning’s Irish Times, the then first colour front page picture in the history of the newspaper.

Roche, his voice almost shot already, can’t yet imagine the madness of his homecoming back to Dublin and Dundrum the following day. Like Elliott and Kelly, he’d doesn’t ever win back another yellow jersey in a different Tour, and even with allegations of doping towards the fading days of his career, this month of July 1987 may always stand out and sit alone in the Irish sporting psyche.