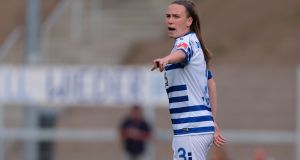 Duisburg’s Claire O’Riordan: ‘The fact that we have stayed up again says a lot about the character we have in the squad’. Photograph: TF-Images/Getty Images

Claire O’Riordan returned home to Newcastle West on Monday having helped to secure Duisburg’s place in the Bundesliga top flight next season and, with it, her own future in Germany for next season. But the Republic of Ireland international admits that she would love the opportunity to play professionally in the striking role she prefers, insisting that scoring goals is her “passion”.

“It was a good season for me because I played a lot and I’ve learned a lot,” says the 25-year-old after returning from suspension to come on in her club’s last game of the campaign, a 2-0 win over bottom side Jena that secured Duisburg’s survival and, in the process, helped to send Amber Barrett’s Cologne down.

“We’ve been fighting relegation, in a tough situation,” she says, “but now we’re focusing for the next season. The only sad part is that we will have to do this all again.

“I’ve had two years of it now. And while I can see why we are a fighting relegation team – I understand it and I understand that I am a part of it – it takes a lot for the players to be able to do this consistently because it is very mentally draining. I think the fact that we have stayed up again says a lot about the character we have in the squad but it is a clear fact, all we do is fight relegation and the only thing that would change that is money.”

It is hard to argue with the pessimistic assessment.

In a league dominated at the top by Wolfsburg and Bayern Munich, the four teams to finish immediately above the drop zone after Sunday’s final round of games are the same sides, in the same order, on almost the same points as in the previous campaign. The two that came up went straight back down but the promotion of Werder Bremen for next season will, O’Riordan believes, make things that bit tougher for those whose budgets mean that steering just clear of relegation is about as good as it is likely to get in the immediate future.

Still, the ninth-place finish means that the second season of the two-year deal O’Riordan signed with the club last year now kicks in and she is happy to be in a position to return in a few weeks’ time. Ideally, though, she would change one key thing for 2020/21.

“I’m very happy here and grateful for the opportunity to play professionally, but I think next season I’m going to have to have a serious conversation with the coach here [former Wolfsburg defender Thomas Gerstner] because it’s my passion to be a striker, to score goals.

“It’s very difficult to be a player who consistently scored goals and then be put in at in at the other end of the pitch where you have no impact towards that.”

That shift first occurred under then Ireland manager Colin Bell who capped her as a centre back after seeing her play there in a training session. After two international games, the Duisburg move happened and one part of the pay-off, from her perspective, was that she became a regular for her country.

Now, she is more often on the bench and she wonders what might have been had she earned the move to Germany in her preferred position.

“I’m in the Ireland squad as a defender now and I understand that when the team is doing well, defences don’t get changed, so I have to bide my time and be ready when my chance comes,” she says.

“That said, I see other strikers who scored goals back at home and they have been able to go on and play professionally away as strikers. I have been told that some people don’t think I am good enough to play there for Ireland and that’s their opinion but I do think that if I hadn’t played at centre back in those two games for Ireland, Duisburg would still have signed me.”

O’Riordan has raised the issue with Gerstner and has failed initially in persuaded him to try playing her further up the field. She still hopes to have a more offensive role next time around but, she acknowledges: “Maybe I just have to ride out another season as a centre back and who knows, if I can’t play as a striker outside of Ireland, maybe I just have to go home and play there and just be happy.”

That, though, is one for after what will be shorter than normal close season because of the coronavirus related break to the campaign just concluded.

“I have about four weeks at home,” she says, “although after about 10 days we’ll probably all get a running programme from the club, I’m not entirely sure yet. I’m looking forward to it, though, just getting to relax with family and friends . . . to not thinking about football for a while. You know yourself.”

Sadio Mané ends Aston Villa’s resistance at Anfield 18:52
Marcus Rashford ‘blessed’ to be fit again and back in the goals 17:57
Matheus Pereira inspires West Brom as they keep in touch with Leeds 17:44
West Ham edge closer to safety despite late Shelvey equaliser 16:50
Enable can’t reel in impressive Ghaiyyath at Sandown 17:01