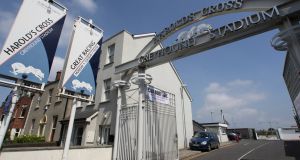 The closure of Harold’s Cross Greyhound Stadium has been brought forward to take place with immediate effect, Irish Greyhound Board (IGB) announced today.

The gates of the stadium have been chained shut with security outside and the traps are being dismantled and taken away.

In a statement, IGB said that the decision to close Harold’s Cross was taken with regret, but it has been decided to concentrate Dublin racing activities in IGB’s national stadium, Shelbourne Park.

The organisation is currently saddled with €20 million debts which stem from the building of Limerick Greyhound Stadium in 2011 and they have decided the best course of action is to sell Harold’s Cross.

The weekly racing programme will be expanded at Shelbourne Park, which has twice the capacity of Harold’s Cross, to four days per week from next Friday, February 17th. All 12 staff affected at Harold’s Cross will be offered redeployment by IGB.

“If the stadium is locked, then everyone is locked out of their jobs. Somewhere in the region of 80 per cent of out Tote staff are SIPTU members, so I doubt very much Jack O’Connor will take too lightly to his staffed being locked out,” Alan Redmond – the director of the stadium – told Liveline on RTÉ Radio 1.

Racing due to take place on Tuesday night consisting of 11 races and 66 dogs will now be cancelled.

The historic Dublin venue opened in 1928 and hosted race nights every Tuesday and Friday.

“They blew all the money that they had on building a new stadium in Limerick,” Redmond added. “Unfortunately that ran way over what it should have because unfortunately they board at the time didn’t listen to their solicitors.

The Grand National has been held at the south Dublin stadium since 2001 – most recently won by Brinkleys Dominic last year.

When the track orginally opened it introduced a race which would eventually become the modern day Irish Greyhound Derby.

This led to a dispute between the track and near neighbours Shelbourne Park as the Irish Coursing Club decided to give the Oaks to Harold’s Cross and the Derby to Shelbourne Park when they issued a new list of classic races in 1932.

After a dispute it was decided that the tracks would alternate the hosting of the Derby year-by-year until 1967 when it was switched permanently to Shelbourne Park.

That was a theme that would continue with the Oaks also switching to the neighbouring track and, ultimately as has now happened, all of the Harold’s Cross racing going two kilometres down the road.

In a statement, IGB said: “An overriding financial consideration informed the decision to concentrate our Dublin racing in Shelbourne Park. The legacy debt burden (net group debt is €20.3 million) which the industry and IGB have been struggling with since the Limerick Stadium project, which cost €21 million on completion in 2011, necessitates the sale of Harold’s Cross and the realisation of its asset value.

“IGB’s business plan is to address its significant debt, eliminate bank borrowings and reduce interest payments. The Indecon Report commissioned in 2014 by Government and accepted by the Board of the IGB, recommended the sale of Harold’s Cross to reduce debt levels. There is no alternative to this course of action. Unless the debt issue is addressed, no viable future exists for the industry and the sale of Harold’s Cross offers the most significant opportunity to reduce that debt.

“IGB has taken the decision to bring forward the closure of the stadium and its sale. The decision to close Harold’s Cross with immediate effect has been taken so that IGB can move forward with creating a viable future for the industry without delay. The uncertainty surrounding the future of Harold’s Cross has been a distraction for the business. The closure of Harold’s Cross and the transfer of the racing schedule to Shelbourne Park will bring an end to this uncertainty and allow IGB continue to grow the sport’s profile and business in Dublin.”

The stadium also acted as a football venue for a number of years, most notably for Shelbourne and St Patrick’s Athletic.

Back in the 1930s the now defunct Dolphin won a league title at the venue while Transport and Brideville each played there for 11 seasons.

Eoin Morgan: More than England’s captain, Dubliner is the team’s touchstone 06:00
Gerry Thornley: Ireland don’t want to box themselves into a corner 06:00
Kevin McStay: Maybe a knockout All-Ireland Championship is the long-term solution? 06:00
Successful year for Stephanie Meadow takes her to LPGA event 06:00
Owen Doyle: Ireland suffered from officiating of the breakdown 06:00