New OCI chief plans to rebuild integrity of the organisation 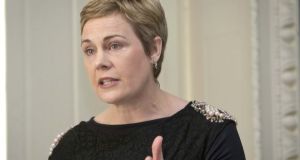 The new president of the Olympic Council of Ireland (OCI) has said she plans to rebuild the integrity of the organisation during her term.

Sarah Keane, chief executive of Swim Ireland, was appointed OCI president following an EGM last week where she won 29 of the 43 votes cast.

Ms Keane (42) succeeded Pat Hickey who had held the position largely unchallenged since 1989, winning a record seventh four-year term in 2014.

Mr Hickey (71) had indicated that the term would be his last term, before the Rio Olympic ticket-touting charges last August rubber-stamped that decision as he stepped aside in the immediate aftermath.

He was detained for almost five months in Brazil following his arrest in relation to alleged ticket-touting at the Olympics.

Mr Hickey was released on bail in December allowing him return from Brazil to Ireland on medical grounds. A court date has yet to be set for his trial.

He has repeatedly declared he is innocent of all charges.

Ms Keane, a former swimmer, said she plans to rebuild the credibility of the organisation in order to maintain sponsorship support.

She said she will introduce training for the newly appointed board including newcomer Colm Barrington as vice president, Robert Norwood as second vice president and Sarah O’Shea as general secretary, when they meet for the first time on Friday.

Asked on RTÉ’s Seán O’Rourke Show about a previous policy where “the blazers” travelled in first class while the athletes travelled “at the back of the plane”, she said: “if the Olympic Council is paying then I’ll be at the back.”

Ms Keane said that if athletes travel in the back of the plane then they factor in recovery time when they reach their destination. She said if given an option many athletes would prefer to see the money that could have been used on more expensive plane tickets being invested elsewhere in sport.

Ms Keane also said she wants to encourage the smaller sporting federations. “I wouldn’t want to limit anyone. I will be interested in hearing their contributions. There is a lot of potential for smaller sports and also for winter sports.

Ms Keane said the ticketing controversy was “financially devastating” for the OCI and that legal costs in Brazil and Ireland, communications fees, and costs for the production of reports have to date cost over €800,000.

“I like to think that at some stage it would be an investment in the future and that we will get some of it back through insurance,” she said.

When asked about Mr Hickey, she said that anybody close to the OCI feels that he is a very dominant and strong character.

She said she had been shocked at what happened in Rio, and that she understood how devastating it had been for parents who could not get tickets to attend events in which their children were participating.

“People felt that they didn’t get a fair shake and that is something that has to be looked at.”

1 Jim McGuinness: There is a way to save championship and make it competitive
2 Sordid murder of hurling brothers still resonates in south Galway
3 Klopp furious as injuries mount and VAR decisions prove costly
4 Jackie Tyrrell: What ever happened to Austin Gleeson?
5 Norwich denied three points as Coventry steal a point late on
Real news has value SUBSCRIBE
Here is your handy guide to sport on television this week