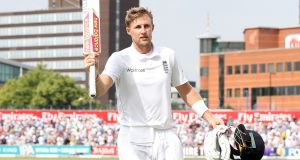 Joe Root has been appointed as England’s new Test captain after accepting the position during talks with Andrew Strauss, the director of cricket, over the weekend.

The 26-year-old had been vice-captain under his predecessor, Alastair Cook, since May 2015 and had his promotion confirmed by the England and Wales Cricket Board on Monday morning after it was approved by the board.

Root, who becomes the 80th man to hold the position and the 10th from Yorkshire, will be officially unveiled at his home ground of Headingley on Wednesday afternoon, with Ben Stokes, the all-rounder, installed as his new vice-captain.

“It is a huge honour to be given the England Test captaincy,” said Root. “I feel privileged, humbled and very excited.

“We have a very good group of players and I’m looking forward to leading them out in the summer, building on Alastair’s achievements and making the most of our talents in the years ahead. The senior guys in the changing room play a very influential role and whilst there’s a natural progression for me it’s a huge support to know that they are there to help and advise.”

Cook called time on his four-and-half years in the job last Monday citing the need for a fresh voice to be heard in a dressing room that, he admitted, had stagnated in 2016, losing eight of its 17 Test matches and finishing the year with a crushing 4-0 defeat in India.

Root, as the leading batsman in the side was the standout candidate among the emerging generation of players, will now look to drive the team forward. His reign will begin at Lord’s on 6 July with the first of four Tests against South Africa.

“Joe is the right man to be our next Test captain and I’m thrilled that he has accepted the role,” said Strauss. “After Alastair Cook stepped down last week, the selectors and I engaged in the proper process to appoint his successor.

Following informal and formal conversations with members of the Test team at the end of the week, the offer was put to Joe and he accepted immediately.

“Joe has shown a number of admirable qualities in his Test career so far. Making his debut in 2012 at the age of 21 and going on to establish himself as one of the premier batsmen in all forms of the game in such a short period of time demonstrates his drive, determination, cricketing intelligence and an ability to learn that will serve him well in his new role.

“He is universally respected by his team mates, passionate about driving the Test team forward and extremely excited about the prospect of leading his country.

On the promotion for Stokes, Strauss added: “He has real presence and influence within the team environment that serve as a great source of support for Joe. I have no doubts that the responsibility will also help Ben to continue his rapid rise as a world class all-rounder.”

With a three-match series at home to West Indies following immediately after the visit of the Proteas, Root will have seven Tests in total to shape his side before the defence of the Ashes gets underway at the Gabba in Brisbane on 23 November.

There will naturally be concerns as to how the additional responsibilities that come with the captaincy will affect Root’s returns, not least since he remains a key player for England in all three formats and became a father in January.

Root has risen to most challenges since making his Test debut in Nagpur in late 2012, however, averaging 52.8 from his 53 caps to date – including 11 hundreds during this time – and is currently third in the world Test batting rankings.

England will hope the additional responsibility brings a greater ruthlessness to his game – just three of his last 17 scores in excess of 50 having been converted into hundreds – and that his time back in the ranks of the one-day and Twenty20 sides, under captain Eoin Morgan, will prevent the role from being all-consuming.

Having broken into the side aged 22, Root’s captaincy experience has been limited to date, having led Yorkshire just three times in the County Championship to go with a single fixture in charge of England Lions in 2013 and handful of matches at age group level.

But in Cook, who led England in a record 59 Tests, he will have a valuable resource, with the 32-year-old opener switching to a new role as a senior player and looking to continue his record-breaking career for another four to five years.