2017 Six Nations Round Two: The team of the week 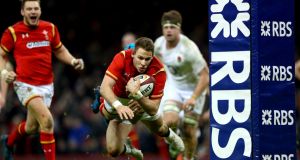 Liam Williams was one of the standout players as Wales were narrowly beaten by England in Cardiff. Photograph: Inpho/James Crombie

Perhaps not as tidy a performance as he produced against Ireland but again Hogg was the standout fullback on show across the second weekend. Took his try tally for the tournament up to three after producing a lovely step to evade Baptiste Serin and score in the corner to give Scotland a very live chance in Paris.

England’s utility back showed he has the x-factor needed to be a world class Test winger against Wales in Cardiff. He provided two of the games standout moments, chasing down Dan Biggar to prevent an intercept try before crossing for the match winning score - collecting Owen Farrell’s pass outside the Welsh 22 and burning past a hapless Alex Cuthbert for a flying finish.

Ringrose was one of a number of standout Irish performers against Italy, and his second half try - which saw him produce a darting change of direction before slaloming 40-metres to score - drew inevitable comparisons to Brian O’Driscoll. He also coupled his attacking threat with another excellent defensive display.

Another impressive performance from the Toulouse centre which suggests he is on the verge of fulfilling his great promise. He was a constant threat with the ball in hand and delivered a cunning finish for the French try which ultimately sucked the wind out of Scottish sails in Paris.

Craig Gilroy deserves an honourable mention for his quickfire hat-trick off the bench but Liam Williams was scintillating in Cardiff, threatening every time he got the ball in hand. He was well utilised by Wales, and showed his pace and craft to constantly break into the English 22. He gave Jack Nowell a torrid time and took his try well after running an unstoppable line.

This was a return to form for the Welsh outhalf, who was one of a number of players who didn’t deserve to be on the losing side in Cardiff. His kicking was good and his reading of the game even more so - twice he intercepted and had the intelligence to kick ahead when he knew he didn’t have the gas to reach the line.

Webb’s performance in Cardiff was enough to suggest Warren Gatland will have a difficult decision to make between him and Conor Murray for the Lions’ number nine jersey. He was a constant threat around the fringes and nearly scored after a clever snipe at a ruck - and he supplied the pass for Liam Williams’ score.

Healy got his number one jersey back for Ireland’s trip to Rome and he’s got every chance of keeping Jack McGrath out of the team for the visit of France in two weeks. Helped Ireland win all of their scrums and made a big impression around the park during his 50 minutes - it’s great to see him back.

Helped ensure the Welsh lineout ran smoothly but it was his work in the loose which was most impressive. He made 11 tackles during a whirlwind opening 40 minutes which saw him set about England like a one-man wrecking ball. His presence was missed when we was replaced by Scott Baldwin.

France decimated Scotland at scrum-time, almost to the point you could see the visitors grimacing every time the hosts knocked the ball forward - which was a lot. Antonio was at the heart of this, and an intriguing frontrow battle awaits in Dublin, with Cian Healy and Tadhg Furlong also impressive.

The man of the match in Cardiff, Launchbury made 23 and 18 carries tackles in what was a times at brutal battle at the Millennium Stadium. The Lions’ secondrow cupboard is currently well stocked, but Launchbury’s performance suggests he can’t be far from the front of the queue.

It was an honest, gutsy and relentless performance from Ball who firmly put his hand up and carried endless amounts of static ball into the miserly wall of white. He might not be the flashiest lock but he was tireless in the engine room alongside his skipper Alun Wyn Jones.

It was another monster display from Ireland’s talismanic backrow, who showed his brilliant mix of sheer power and instinct in Italy to become the first forward in Six Nations history to score a hat-trick. As well as being a wrecking-ball in attack, he showed he is close to the complete package with a good defensive play and a kick to set up Craig Gilroy’s second try.

Tipuric retains his place in the team of the week after putting in another huge shift in Cardiff, making 19 tackles - 11 of which came in a barnstorming opening 20 minutes. His ability to get around the pitch is unparalleled and he seems to appear wherever the ball is.

That the introduction of Talupe Faletau on 53 minutes was questioned tells you all you need to know about Moriarty’s performance in Cardiff. He was a man mountain against England and destroyed Owen Farrell, Nathan Hughes and Maro Itoje with wince-inducing hits. Faletau is a world class number eight but Wales were a poorer side after Moriarty’s departure.