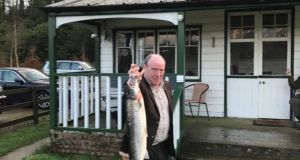 Ronan O’Connor with the first salmon caught in Ireland for 2017 from Careysville Fishery on the Munster Blackwater.

Careysville Fishery on the Munster Blackwater river welcomed regular Navan angler Paul O’Malley and his party of three friends on opening day (February 1st). The group fish the first week of the new season each year.

After a large flood reaching 7ft on the gauge five days earlier, the river dropped down to 3ft 7in on the first day of the season. The water was still murky with just over 2ft of visibility, not ideal for fly fishing but clear enough to spin. Conditions during the morning were extreme with high winds and rain.

However, after lunch the wind dropped, the rain stopped, the sun made an appearance and conditions were more pleasant. During the afternoon, three fresh fish were then spotted moving up, including one very large spring fish.

At 4pm, Ronan O’Connor hooked and landed a fresh spring fish of 3.175kg (7lb) on a Flying “C” spinner, the first of the new season and, as it turned out, the first in Ireland.

“If conditions are favourable, Careysville quite often lands a spring salmon on the 1st February, but as we open a month later than other rivers, catching the first salmon was an historical first for us and possibly the river Blackwater,” fishery manager Patrick Devennie said.

The following statement from the chairman of the Trout Angling Federation of Ireland (Tafi) relates to pike management in brown trout fisheries.

“Recently Tafi, together with other angling federations, have been asked, once again, to make submissions on the management of pike populations in designated brown trout fisheries.

“It is of great concern to Tafi that the trout review policy, which deals with this issue, has not been implemented or for that matter commenced despite the fact that all parties to the policy have agreed to its implementation namely Inland Fisheries Ireland (IFI), Irish Federation of Pike Clubs, Tafi and Nara.

“Tafi is shocked by the revelations on the Irish Pike Society page of the intention by individuals from Ireland and United Kingdom to introduce chub, barbel and catfish (all invasive species) to the salmonid fisheries of Corrib, Mask, Conn, and to the Clare river, Robe river and Moy river.

“Tafi has expressed concern to IFI at these disclosures and have requested IFI to launch an immediate investigation in conjunction with other relative state bodies. Such actions must be condemned by all right-thinking people.”

Underwater monitoring has revealed one of the largest shoals of arctic char ever seen in Llyn Padarn, Snowdonia, north Wales. About 100 were recorded in one shoal, as part of Natural Resources Wales’s (NRW) annual count to see how many head upstream from Llyn Padarn to spawn.

The footage can be seen on NRW’s YouTube channel: https://www.youtube.com/watch?v=jIgt7BR7vKY

The fish were monitored at the end of last year, when char traditionally migrate up Afon y Bala river to spawn. As well as underwater cameras, NRW used a sonar acoustic device – essential to monitor the fish in the dark and in turbid water.

Several measures have been taken to improve the environment in Llyn Padarn and conserve the species. Young char, reared in NRW’s hatchery have been released into the lake to boost the population.

NRW’s Sian Williams said: “Gathering evidence like this is a vital part of our work. I’m delighted that measures to enhance Llyn Padarn and its arctic char are now bearing fruit, with improved spawning runs in Afon y Bala.”

The cameras also picked up brown trout, salmon and eels. NRW is now analysing all the data and further updates will be announced later this year. The programme is supported by the National Slate Museum and Padarn Country Park.

The spring sale at Rory’s Fishing Tackle shop in Temple Bar, Dublin continues until next Sunday (February 19th) with 20 per cent off everything online and in store. There are even larger discounts on many items. Online customers should enter coupon code “2017” before making their purchases.