Ken Early: How high-flying Leicester have landed with thump

Ranieri had best team last season, not the best players – this time he has neither 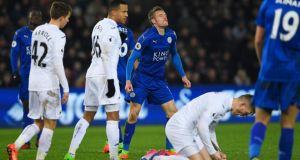 Nineteen years ago, Howard Wilkinson came to Dublin to talk to some students about football. He was then the last English manager to have won the English league title. He still is.

Wilkinson was working as the technical director of the FA, and he gave glimpses of the unorthodox methods for which he was renowned. At one point he drew a series of simple shapes on flipcharts, positioned them at various corners of the room, and ordered everyone in the audience to go and stand next to the shape that they felt best reflected their character.

The years have dulled the details of what precisely came next, but it is my recollection that Wilkinson labelled some of the groups degenerate, dishonest scum, while others were virtuous, pure and true, depending on whether they had gone to stand next to a circle, a square, a diamond, etc. It was confusing, but it was also fun being ordered around the room by a football man of Wilkinson’s stature.

After a couple of minutes he stopped the video and surveyed the audience.

“What do all those players have in common?” he asked.

People furrowed their brows in thought.

There was another video, which Wilkinson introduced as “the best team you’ll ever see”. It turned out to be footage of a flock of geese flying in V-formation.

Wilkinson explained that these geese had to migrate thousands of miles to their breeding grounds. One goose alone would have little chance of completing the journey, but there was no limit to how far geese could go when they united as a team, bound together by an ethic of selfless co-operation.

Years later I read that Wilkinson had shown the same goose video to his Sunderland players, who mocked him mercilessly for it, running around the training ground in a V-shape, flapping their arms, making honking noises, and so on. But while the point could have been made with a lighter touch, there was nothing wrong with the point itself: the team allows ordinary individuals to do extraordinary things.

Someone asked Wilkinson why his Leeds title-winners of 1992 had fallen apart so badly the following year. They did not win an away game all season, and finished 17th, just two points off relegation.

Wilkinson didn’t really know why this had happened. But then, the whole story of Leeds’s rise and fall was hard to explain. Few people had expected them to win the league in 1992. They had quality midfielders like Gordon Strachan, Gary McAllister, Gary Speed and David Batty, but the defenders and attackers were journeymen, at least until Eric Cantona arrived in the second half of the season.

After they won the title Leeds added David Rocastle, a champion with Arsenal, the striker Noel Whelan from the youth team, and several other players. They lost no key players except Eric Cantona, who joined Manchester United in November, with the season already in meltdown. The 11 players who made up their most-selected XI all played in the title-winning season. The team was simply no longer a team, and nobody really understood why.

Watching Leicester make it five league defeats in a row on Sunday, you couldn’t help being reminded of Wilkinson’s Leeds.

Unlike Leeds, Leicester lost one of their most important players when N’Golo Kante went to Chelsea. Kante is top of the league again, and without him Leicester have ground to a halt.

Riyad Mahrez and Jamie Vardy won the player of the year awards last year. They have scored eight league goals between them all season. Last year, they scored nine in the first six matches. It’s not as easy to look good when Kante isn’t there giving you the ball all the time.

Leicester have tried to replace Kante with players like Daniel Amartey, Nampalys Mendy and lately Wilfrid Ndidi, but replacing players is not an exact science. Howard Wilkinson could have told them that. Rocastle looked a safe bet for the Leeds midfield in the summer of 1992, but he kept getting injured.

A couple of years later Wilkinson signed Tomas Brolin, a goalscoring maestro for Sweden in international tournaments. Brolin left a few months later, widely regarded as the worst signing ever made by a Premier League club. “I dropped a bollock there,” Wilkinson reflected during his Q&A in Dublin.

Maybe the same thought has occurred to Jamie Vardy, who turned down a move to Arsenal in the summer. But even Vardy, who has lived the whole story, would struggle to explain why Leicester were so good last season, and so bad this one. It’s a mystery.

The only lesson you can take from their nightmare is that when you win a major trophy with a club nobody expected to win it, you should follow the example of Kante at Leicester, Cantona at Leeds and José Mourinho at Porto and Inter, and get out as quickly as you can.

1 Gordon D'Arcy: I know what Joe and Cheika would do. Fix the basics
2 Darragh Ó Sé: Cork and Donegal went out with the wrong attitude
3 Simon Easterby admits Ireland may need to take new line on maul
4 Can Solskjaer’s Man United find their groove when it matters?
5 Sean Moran: Bloody Sunday centenary weekend will live long in the sporting memory
Real news has value SUBSCRIBE
Crossword Get access to over 6,000 interactive crosswords