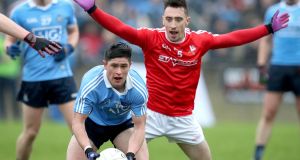 Dublin’s development panel – referring to it as the county’s thirds has become controversial – of players gave their most cohesive display of the Bord na Móna O’Byrne Cup campaign when handing Louth a sound beating in the final at Drogheda’s Gaelic Grounds on Sunday. It is the county’s ninth title and first since 2015.

As the home manager Colin Kelly ruefully pointed out afterwards the margin was a bit misleading in that Louth should have been a whole lot better off than 0-5 to 0-6 behind at half-time after a first half in which they continually found avenues through Dublin’s defence but squandered a succession of good chances.

Tommy Durnin was one-on-one with Dublin goalkeeper Evan Comerford but the latter saved well and put together with the team’s nine wides and at least three shots dropped short in the opening 35 minutes, prompted Kelly afterwards to wonder might the outcome have been different if his side had been 1-14 to 0-6 ahead at the interval.

Whatever about the alternative histories, Louth paid dearly for these inaccuracies once the second half started. Having scored the last three points before the break, Dublin rattled off the next seven before Pauric Smith – the losers’ most threatening player – scored his team’s first point since the 23rd minute all of a quarter of an hour into the second half.

Charged by Jim Gavin and the senior management with finding some new players for the league campaign, acting manager Paul Clarke praised his team for the manner in which they had worked out what needed to be done at half-time.

“We knew the type of game they were going to play – defensive with everybody back. I think we might have been a bit respectful of that as in we were keeping possession and moving it backwards and forwards with one or two really penetrating runs. Our mind set was to push up on their kick-outs, on their extra men and they had two or three for kick-outs, and force turnovers, force errors and make it a lot harder to get up the pitch.

“Our shooting – too many wides and a couple dropped short as well – wasn’t good enough having worked so hard to get it up there. So we asked the guys and they felt that maybe their shooting wasn’t from the shooting zone, slightly wide of where they should be taking scores from. They changed that themselves. We said to them and they addressed it so great credit to them.”

The introduction of Colm Basquel at the break was also a factor. His appetite for possession and ability to hold possession and orchestrate attacks helped the winners turn the screw.

During the campaign wing back Niall Scully has been the outstanding performer and he crowned this display with the Man of the Match award. It mightn’t be the area of Dublin’s most conspicuous need but his ability to act as a link between defence and attack demonstrates a versatility that will make a valuable squad member.

In a cagey opening period of the match Dublin’s forwards were well enough marshalled by their direct opponents even if as Clarke said, some of the approach work was overly studious. Once the team began to inject more urgency into the match they found the space necessary to force openings.

Basquel, Conor Mullally and frees from Paul Hudson drove them into a double-scores advantage of 0-10 to 0-5 before Conor McHugh kicked a wicked point from out in the left corner.

It had all slipped out of Louth’s grasp by the time Basquel got on the end of a flowing move to dummy Craig Lynch in goal and slot in the first goal.

Pádraig Rath, having started at corner back, was around the square to take advantage of a ball coming back off the woodwork but calling it a consolation would be stretching things as replacement Killian O’Gara added Dublin’s second in the last minute of injury-time, having ridden a black card foul by Derek Maguire.

Emmet ó Conghaile was sent off also in injury-time for a second yellow card.