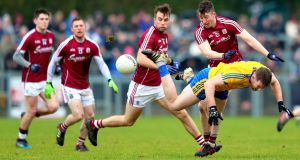 Galway had too much for Roscommon in Kiltoom on Sunday. Photograph: James Crombie/Inpho

Two goals in either half from Cillian McDaid and Danny Cummins saw Galway retain their FBD Connacht League title against Roscommon at Kiltoom.

Once Cummins’ 42nd minute goal catapulted his side six points ahead, Roscommon were unable to reel in the Tribesmen, despite enjoying plenty of possession.

“It’s just nice to lift trophies when you’re in a final,” said Galway manager Kevin Walsh. “When you win the only trophy on offer at this time of year, you’d have to be happy. But we won’t get too excited about it.

“We won’t know where we are in the greater scheme of things until the league starts. Momentum is important, albeit it might count for nothing against Cork next week

“So we have to keep moving forward.”

For his Roscommon counterpart Kevin McStay, the post-match analysis was pretty clear-cut. Giving away possession cheaply proved to be their undoing.

“What’s killing us are these critical turnovers. There’s a sense that they’re completely unforced. We’re giving other teams huge opportunities with a misplaced foot pass out over the sideline or the endline.

“Until we come to grips with it – and I feel we will because we have a lot of very good, skilful footballers – we’ll be under pressure.”

Roscommon started well and led 0-5 to 0-3 after 14 minutes but McDaid’s 19th-minute goal allowed Galway to wrestle back the initiative and they went into the break 1-8 to 0-8 ahead.

Roscommon wasted far too much possession after the break. Galway pounced on every mistake, and when Thomas Flynn cut in from the right in 42nd minute, Cummins was on hand to nick his side’s second goal.

“Overall I think that we deserved it,” said Walsh. “I suppose the aim for both teams starting out was to try and develop players. We’re just trying to strengthen the panel as much as we can. There’s still relatively a lot of inexperience there,”

For Roscommon, a tough trip to Omagh signals the start of their Division One League campaign.

“Tyrone away is going to be very difficult for us,” said McStay. “We have to be aiming to get at least two points from our first three matches.”