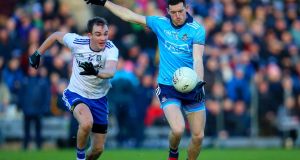 Consider this: the last time Dublin lost two consecutive league matches, they hadn’t won an All-Ireland in 15 years, Brian Cowen was taoiseach, and Mary McAleese was still president. That of course being 2010, when they lost round five to Cork, then round six to Galway, during Pat Gilroy’s second year as manager.

They have failed to win two in succession, losing then drawing (in 2013 and 2015), but even if history has lined up Galway for a potential repeat of 2010, Jim Gavin’s team have that capacity to improve a lot since losing to Monaghan last Sunday, Galway are likely to struggle again to score enough to beat them.

Once dubbed the fastest man in Gaelic football, Mickey Newman marked his return to Meath after a year out with seven nifty points against Tipperary last Sunday, six frees, giving Andy McEntee just the start he wanted.

Truth is both these teams consider themselves prime candidates for promotion, Donegal edging out Clare last Sunday. While Declan Bonner remains without Paddy McBrearty and Michael Murphy, they still boast a little more experience, plus are at home in their secure fortress of Ballybofey.

Westmeath had to come back from the dead in the slightly fortunate win in Offaly and Carlow were the only side to take points off them in their promotion season two years ago. Jack Cooney’s team deserve to be favourites Carlow, buoyant after a good win, won’t be pushovers.
Verdict: Westmeath

Laois v Louth, Croke Park, 3.0
Louth will be hugely disappointed by the failure to beat understrength Longford and the poor discipline that saw their entire centrefield sent off. Things went more smoothly for John Sugrue’s team with a powerful statement against expected promotion rivals Down and the firepower of Evan O’Carroll et al will be enough here.
Verdict: Laois

Tyrone were soft in defeat but, even missing David Clifford, Kerry always looked lively in attack, enough to suggest they’ll raise a higher score again against a Cavan team that looked a little stagnant in losing to Galway, as manager Mickey Graham still settles in. They still missing Gearóid McKiernan too.
Verdict: Kerry

Roscommon v Monaghan, Dr Hyde Park, 2.30pm
The exact value of Monaghan’s win over Dublin last Saturday may be debatable but there’s no questioning the manner of it, turning around a six-point deficit. Their use of the offensive mark was particularly impressive, Conor McManus and debutant Stephen O’Hanlon coming off the bench to show Dublin exactly how it’s done.

Jack McCarron was equally impressive, and while Roscommon rallied hard to close back on Mayo last Sunday, without the suspended Donie Smith will find it hard to match Monaghan’s attack.

Tyrone v Mayo, Healy Park, 2.30pm – TG4 (deferred coverage)
Like Dublin’s defeat to Monaghan, Tyrone’s loss to Kerry is unlikely to leave any long-term scars (they lost their opening game last year, then made the All-Ireland final), although Mickey Harte looked decidedly puzzled as to why they only managed one point in the first half. Mayo will test their hand as much as Kerry, Harte calling in Kieran McGeary and Lee Brennan, the Healy Park factor may be possibly enough to swing it.

Cork v Kildare, Páirc Uí Chaoimh, 1pm
Both these teams are still eyeing promotion, both drawing last week, there’s no room for error here, and the sense is Kildare are less likely to make it, Mick O’Grady and Neil Flynn back on board following suspension. Cork were unlucky against Fermanagh, conceding the equaliser at the death, but still lack a consistent 70 minutes performance.

Tipperary v Fermanagh, Semple Stadium
It took a penalty to keep Tipperary in the game against Meath last Sunday, and still without Michael Quinlivan, they look a little paltry in attack, especially if they want to press for promotion. Fermanagh stop-started against Cork, stole the draw, but Tipp appear to have the greater capacity to improve, especially at Semple Stadium.

Armagh v Clare, Páirc Esler
Kieran McGeeney can rightly feel he let the two full points slip against Kildare, Armagh’s five-point lead disappearing in the final quarter. The mercurial Jamie Clarke looks back on form, and they’re playing, it seems, with a bit of confidence. Clare, who fought hard against Donegal last week, will be equally keen for their opening win, David Tubridy still leading the charge, thought McGeeney’s side appear to have the edge.
Verdict: Armagh

Longford v Offaly, Pearse Park
If Longford had the break of the ball in beating 13-man Louth, John Maughan’s Offaly were left stunned by getting outscored by 0-10 to 0-1 in the closing 25 minutes to lose by one. Offaly were lifted by confirmation of Niall McNamee’s return from retirement and if they can reproduce the early form last week, they can get off the mark with a restorative win against understrength opponents.
Verdict: Offaly

Sligo v Down, Collooney
Two very disappointed teams after losing on the opening weekend: 14-man Sligo were well beaten by Carlow whereas Paddy Tally’s first league project as a manager began at home with a decisive defeat. He’s missing first-choice players at the moment but Down should be able to manage this and get the campaign up and running.

Derry v London, Ballinascreen, 12.30
The scale of Derry’s challenge illustrated by the need for a late goal to defeat Antrim, they have a more straightforward challenge here and with home advantage.

Wexford v Antrim, Innovate Wexford Park
Horror show of the first week has to go to Wexford’s second-hand meltdown in Carrick-on-Shannnon. Paul McLoughlin’s side can however bounce back against a useful Antrim.

Wicklow v Leitrim, Aughrim, 2.30
Terry Hyland’s side confirmed the good impression of the pre-season performance when tearing back into the match against Wexford. Wicklow’s narrow win in Waterford isn’t a strong enough form line.