Mark's potential to change football there for all to see 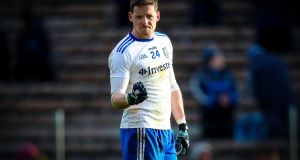 In just a couple of possessions, the potential of the ‘mark’ was clear to see for everyone in Clones last Sunday.

First, Stephen O’Hanlon, just on the pitch, rose above Conor McManus and Jonny Cooper to make a brilliant catch and beat a hasty path through Dublin’s converging defence before scoring a goal.

Then McManus pulled down an acrobatic catch, indicated for the mark and made light work of converting the score. Little wonder that McManus was praising the innovation afterwards, hinting that it should become a permanent addition to the game.

Little surprise either that Tyrone’s Ronan McNamee offered the dismayed perspective of defenders everywhere, suddenly left in no man’s land when a forward makes a clean catch on a pass delivered from outside the 45.

“I don’t what time is given or when you draw a line,” he observed.

But even after the first round of Allianz Football League games, it was obvious that the mark has the potential to radically shift the way managers and players approach and think about Gaelic football. It possibly helped that it had such a conspicuous influence in facilitating Monaghan’s win over Dublin.

In grounds around the country, it had varying impacts. On Saturday night in Castlebar, a monsoon destroyed any chance of the long kick-and-catch. In Drogheda on Saturday night, Louth had one offensive mark while Longford had four.

“It had an impact – the majority of marks that I have seen have resulted in scores,” says Wayne Kierans, who is in his first year in charge of the Louth seniors. Kierans had heard the remarks of both McManus and McNamee and is guardedly optimistic about the potential of the mark.

“The interesting thing I found around that was that the referees would find it hard to police the likes of the hand pass rule. I think it is more challenging for referees to get this one right. There are a lot of variables involved – is it kicked form outside the 45, has it bounced; has it gone 20 metres; has the player decided to take it. I think that is difficult and it will come with time.

“But the other interesting thing in the Longford game was that there were players who took the mark and had their 15 seconds to shoot but then chose to pass the ball. And to be honest, we weren’t ready for it. That is something we’ll be working on and something to think about in the future. But the defender – I think he has to play on until the referee tells him to get back his requisite 13 metres. That’s the only way around that one.”

In Division Four, Leitrim put up the best score of any national league team, registering 3-15 at home against Wexford. As it happened, they ran up that score line the old-fashioned way, without the aid of a single mark. Jason O’Reilly, the former Cavan player and Donegal coach has joined Terry Hyland with Leitrim this year. He says that there are signs that teams are beginning to move the ball more directly into their forwards.

“Whether it is that teams are starting to move away from this diagonal passing and go more direct, I don’t know. Players want it more direct. And in fairness, if a forward makes a good catch inside, the next thing there are sweepers and four or five men around him. So it does help the forward.”

The big issue for defensive coaches is the uncertainty, which McNamee alluded to, created in the minds of defenders. Leitrim brought several referees in to speak with players about the mechanics of the mark – when it was claimed, when a forward would play on – and interpretations differed. It is something that a lot of defensive coaches will have worked on at training this week. O’Reilly can see its merits but believes these creases must be ironed out.

“Down the line, the question is: when does it become a mark? If a fella wants to go on with the ball, does the back stand still. Or if he tackles him, is the ball brought forward? These questions haven’t been answered yet. The back is uncertain for that second. It is going to cause confusion and could be the winning and losing of games.

“It depends what way you work it but it will lead to more pressure out the field to prevent those kicks going in more than anything. Teams will try to stop at source. But it does switch the advantage to the forward. If you go over the last couple of years, with forwards who catch ball it is more than likely to be a free out.”

Because nobody yet knows if the mark has a future, managers are unlikely to devote too much time to working on it. Jim Gavin suggested that Dublin training would carry on as normal. Dublin’s strength in depth offers them that luxury and Dublin’s management team might well regard the extra stress and demands that the mark places on defenders as a useful training exercise.

But for other teams, particularly those desperately fighting for promotion from the lower two divisions, the mark carries the potential to bring about some short-term gains.

The league tends to whiz by and once the championship begins, the mark will be forgotten for the summer. But if it was incorporated into the rules of the game, it would immediately shift the thinking.

“I think this might go permanent and if it does, it is going to be the one rule that will take away the possession mentality that coaches and teams have now,” says Kierans,

“The hand pass rule was never going to do that. The possession-safe mentality would remain with really short kick starts. But with the reward for this mark, it has the possibility to change the game into quicker attacking situations. Its early days but I am happy enough with it so far.”