Developing a tighter defence remains a top priority for Cork 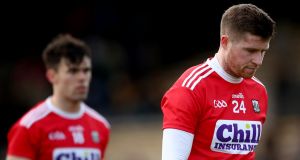 Wexford visit Páirc Uí Chaoimh on Sunday and, in the words of Cork goalkeeper Anthony Nash, are likely to be “hopping off the ground”.

By their own standards, Cork were comparatively lethargic in Nowlan Park as they struggled to match the intent and directness of the defending league champions Kilkenny.

If there are suspicions that the format of this year’s league, without the threat of relegation, might blunt the interest of some teams, Cork’s early showing seemed to validate that concern.

In what promises to be a fascinatingly open All-Ireland championship, Cork are quietly fancied to have a big say. If they win it all in 2019, they will extend their tradition of winning at least one MacCarthy Cup every decade dating back to the 1890s.

The last hurling summer was so operatic that it is easy to forget where Cork were. If they could replay any period, they would surly want the closing ten minutes from the 63rd minute when they gave up a 1-26 to 1-20 lead after 61 minutes against Limerick, with whom they had drawn in the group stages of the Munster championship.

In extra-time, they were repeatedly undone from long direct ball as the Treaty County fired themselves into an All-Ireland final. Nobody beyond Cork thought about their regrets or how close they had come as Limerick completed a famous win.

But there were several uncomfortable reminders of that defensive vulnerability about Cork last Sunday too, particularly for Richie Leahy’s first-half goal that gave Kilkenny a grip they never really relinquished.

When John Meyler was asked about what he was looking for from the game, he gave the inevitable response about the need to be competitive. But he also pointed out the return from Cormac Murphy, who landed four point points from midfield.

Fr O'Neill’s Declan Dalton also impressed in open field as well as executing a brilliant sideline cut in the first half. Both performances are a reminder of the huge scoring potential in this Cork squad.

It was the last weekend in January. In late December, Cork lost out to Clare in the Munster Cup on a late, late goal. Last Sunday, they played in scoring spurts. Meyler admitted that the players didn’t really know each other and were still playing as individuals rather than a team and that it would take time for them to build a cohesive unit.

It is likely to take longer than a week for that unit to take shape. But Cork are back-to-back Munster champions and are nursing disappointments from the last two semi-finals.

John Meyler’s biggest success last year was in taking over from Kieran Kingston in a way that was, as Pat Horgan said last summer, so smooth that the transition was barely noticeable.

But they shipped four goals in 2017 semi-final and three in that pulsating defeat to Limerick. Cork won’t worry just now about their ability to keep the scores flowing in the Munster championship and won’t give too much thought to where they finish in this year’s league either.

It’s impossible to know what to expect from them on Sunday. But developing a stingier and stickier streak in defence between now and the knock-out stages of the championship will become critical if they are to take the ultimate step.