GAA Statistics: John Heslin needed in the middle for Westmeath

Half way there? What have Westmeath learned from last two Leinster final defeats . . . 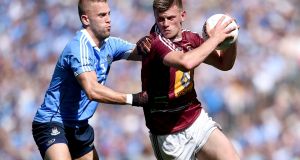 In the last two Leinster SFC finals just four contestable balls were kicked inside to John Heslin. He caught one and was quickly boxed up, winning a free. Photograph: Tommy Grealy/Inpho

Sunday will tell us what Westmeath have learned from their back-to-back Leinster final defeats to Dublin.

In those two encounters, Tom Cribbin’s team have an average losing margin of 14 points – despite their ultra-defensive approach.

There were calls after they overcame Offaly last weekend, via a replay, for them to push up and attack Dublin in Sunday’s semi-final.

To play without fear was Dessie Dolan’s request. Well what’s to fear?

The reality is that in 2017 Westmeath are a Division Four team and Dublin are back-to-back All-Ireland champions. Yes play with confidence, but there is certainly a lot to fear.

They managed 3-17 against Offaly, but also conceded 0-15 in Mullingar.

Now that is no disrespect to a Westmeath team who have shown great courage in recent years. They have some top quality players, and, yes, they are at their best on the front foot.

Paul Sharry, Ger Egan, Kieran Martin and John Heslin would all be featuring for any county team in the country (in the last two provincial finals the latter three contributed 81 per cent of Westmeath’s scores).

But not even Kerry would play Dublin without a clear defence-first mindset. Westmeath do have the personnel to rattle the champions, for more than 35 minutes this time, but let’s be real too.

It didn’t work last year, or the year before. But they must take the positives from those defeats and add something more. No need to rip up the script. Calm minds are needed pre-match, as well as on the pitch.

In the last two finals Westmeath have collapsed in one key period, immediately after half-time.

Combining the scores of the 2015 and 2016 deciders; Dublin have had a two point advantage in the first 10 minutes, and this repeats itself in all of the opening three 10-minute periods.

Buoyed by their positive starts (they only trailed by a point at the interval last year), Westmeath actually shade the final five minutes of the two first-halves by a point.

However, in the first five minutes of the second halves, they have been outscored by 0-10 between the two games. They’re conceding 0-2 per minute.

In 2015 Westmeath converted only six out of 22 scoring chances. A year later they converted 10 of 26

Job done, and even before Dublin released the best of their bench in the final quarter, who actually only added 0-2 in those previous two encounters.

This time though, Westmeath will be hoping to stay within touch into those final two periods. From there, who knows.

There’s a lot more to rectify than halting five minutes of chaos however.

In 2015 Westmeath converted only six out of 22 scoring chances. A year later they converted 10 of 26. That’s a combined shooting accuracy average of just 33 per cent.

And worse still, between the two games, 14 of those missed chances landed in Stephen Cluxton’s hands. That means a Dublin scoring opportunity.

Last year the first goal of the game came directly from an underhit shot. In 2015 both goals came off flat kickouts. Westmeath are shooting themselves in the foot with poor decision making.

Thirteen months ago Callum McCormack was deployed as the sweeper. The Maryland clubman has had injury problems since making his name in the underage ranks, but he is a quality footballer and was able to kickstart counter attacks with intent and direction.

John Heslin had the ball in his hands only 16 times in 140 minutes of football (in play). Wasted

Denis Corroon, Sharry and Egan all performed admirably around midfield in both of the last two finals, but Westmeath are erratic once they hit halfway. And it’s killing them. You cannot beat Dublin with 0-6 or 0-10.

Westmeath have pace and power in their ranks and so their counter-attack always threatens, but there’s no stop watch here. With just one or two inside, cool heads are needed to hold the ball, take the right option, or go from side to side and wait for support.

Westmeath’s main conductor is inside at 14 though: John Heslin.

Inside, where he had the ball in his hands only 16 times in over 140 minutes of football (in play). Wasted. He was fouled for three of those, and scrambled a handpass away on his knees for another four.

In 2015 he played through an injury, but a year later was given the same role. Working inside the Dublin 50'.

Dolan’s heir indeed, but Heslin can play it any way, and anywhere. The St Loman’s club man caught the attention of AFL scouts when he absolutely lorded Jim Gavin’s first Under-21 All-Ireland winning team in 2010. He did so as a minor, midfield in a talented Westmeath team who were edged in the provincial decider.

After a stint down under he came back and established himself as Westmeath’s main man in the middle.

Yet 2-16 in the Westmeath club championship semi-final win over Garrycastle (en route to winning the 2013 club championship) meant a move to the full-forward line, where he had played prior to the minor grade.

In tight games such as the 2015 Leinster semi-final win over Meath, Heslin can win it inside and score off either foot. He can be the difference.

Since Dolan’s retirement, McCormack has had his injury problems, and talents such as Conor Lynam and Ian Coffey have left for New York and Australia respectively. Heslin has had to carry the can. He has an average of 0-8 per game so far in league and championship this year (although that’s only 35 per cent of Westmeath’s impressive total).

He scored 1-6 against Offaly last time out, all but two points coming from play. He was untouchable.

But against Dublin, Westmeath need him out the field. Not standing inside waiting for scraps, or wandering out around the 45 playing on the turn. He is not a poacher, and they can't afford for him to be one.

The Lakesiders need to be as focused about their play with the ball, as they are about stopping Dublin.

In the last two finals just four contestable balls were kicked inside to him. He caught one and was quickly boxed up, winning a free. This Dublin full-back line have shown in their duels with Aidan O’Shea, that numbers win out under aerial bombardment. He will not be left one-on-one often enough to win the game, even if he won and converted under every kick.

And that's the objective isn't it?

Brian Fenton, Kevin Feely, and David Moran have shown the importance of clever distribution from midfield, between the two 65s, and in the head-above-water area around the bunched defensive zone.

Heslin has the ball skills, and vision; and the strength to hold on for long enough. He can dictate the attack from the middle third, and he’ll mix it too.

He’ll get Westmeath playing on their terms when they have the ball, rather than treating possession like a prison break on every attack.

The Lakesiders need to be as focused about their play with the ball, as they are about stopping Dublin.

Get their main man conducting, and stay tuned in after the break.

Believe it or not, Dublin can be tested on Sunday, Westmeath are halfway there already.