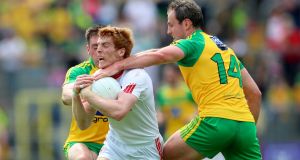 And then the dam burst. After a decade defined by tough and claustrophobic battles between these fierce rivals, the best of Tyrone flooded through Donegal’s defence and, worse, through their minds on another tar-melter of a day in Clones.

For 20 minutes, this was a brilliant game of football and then Tyrone just slipped into gear - a high summer register - with which this young Donegal team could not cope. In the first half, Tyrone beat their old rivals with a series of breathtaking points from distance, with Niall Sludden’s pair the pick of the bunch.

Early in the second half, they rubbed salt into the wound when Tiernan McCann galloped through on goal with nothing except the ghosts of the old Donegal defence to halt him. Thereafter, they owned the day and sent out a clear message of their All-Ireland intentions.

Mickey Harte’s team should have had three goals here and might well have had five. It was a masterful performance by a team that Harte has built with painstaking precision and patience during the Donegal revolution. Everything fell into place and it was magisterial. It was also, as someone in the crowd of 22,609 remarked as they applauded the Red Hand players in the hot sun-shine, “some scutchin’.”

“I wouldn’t call it perfect,” smiled Mickey Harte afterwards, declining the compliment. But it was plain to see that the great Errigal strategist was pleased with his boys here.”I think it was impressive, at times, but at other times we made plenty of errors that we need to tidy up on. We gave them a bit of a run in the middle of the second half, when they closed the gap with a goal and created a few more goal chances - if some of those had gone in, or their first half goal chance, the complexion of the game could have been so, so different.

“It’s easy to sit now and look at the scoreboard and think we had an easy day out - no, we hadn’t. We actually worked very hard for 45-55 minutes and that made the last 15 or 20 not as tense as it might otherwise have been. We worked ourselves into that position to be able to see out the game comfortably, but if you reflect on the video evidence there’s still plenty of things we could tidy up on.”

He sounded like he was trying to convince himself here. Everything worked for Tyrone. Padraig Hampsey’s match-up on Michael Murphy finished in a man of the match award for the Coalisland man. Tyrone ruined Donegal when they pushed up on Niall Morgan’s kickout. Colm Cavanagh put in a Footballer of the Year type performance; even after the energy had ebbed from the day he was to be seen plucking a huge ball from his own goal line. It wasn’t just a win: it was a thorough ransacking of everything Donegal had built up over the league. But for three brilliant saves by goalkeeper Mark Anthony McGinley, this day could have become an embarrassment.

Down 0-12 to 0-5 at half time, any prospect of comeback ended when McCann took a handpass from fullback Ronan McNamee and simply cut through a flimsy line of Donegal cover.

“The game petered out after that,” said Rory Gallagher. “We showed a lack of fight as well which was disappointing. It is hard to tell [WHY]. We were not that naïve to think that we would land into Ulster and play the Tyrones of this world and hit the ground running. It is a big step-up from league and we are aware of that. We have a very young team. It does not make it any easier today but it is something we have to learn from.”

This will be the first time in seven summers Donegal will not appear in an Ulster final. The lingering doubts about the inexperience of their team materialised in a nightmarish way. The boys of spring - Ciaran Thompson, Jamie Brennan and Eoin McHugh - were washed away in the Tyrone currents. Donegal made no secret of their ambition to become a high-scoring side: they were stuck on 0-6 after 55 minutes and struggling to get a shot off.

And they were eerily compliant, allowing the Tyrone men to move the ball and make decisions in their own good time. So for all of Tyrone’s strengths, it was clear that Donegal were playing through a huge collective malfunction. In the dry heat of Clones, they lost their bearings and there was nothing to do but play out time.

A Tyrone move in the 55th minute illustrated this. A hesitant Donegal attack was quickly transformed into a turnover and foul. From the free, Colm Cavanagh stood in front of the Gerry Arthurs stands, blissfully unmarked. Niall Morgan pinged a ball to him. Sean, the brother, arrived in support, bust through the covering tackle and played in Rory Brennan, Tyrone’s speed merchant through. Just three players obliterated Donegal’s cover and Brennan cut through on goal, the Clones crowd rising in bloodlust and urging him on. He was denied by McGinley and Donegal scrambled clear. But it was obvious that their minds were addled and their bodies tired.

This, for the youngsters, was that thing everyone had spoken about: championship. This was that bogeyman of their youth: Tyrone.

5 TV View: No need to feel sorry for England, but if it was any other team

The sports fan would like to wake up now, thanks very much 06:00
Six Nations: Will Connors sets the backrow benchmark in Rome 06:00
Ken Early: Referees and VAR now thrust to centre stage 06:00
Craig Casey and Ryan Baird give a glimpse of Ireland’s future in Rome 06:00
Plenty for Farrell to muse on after encouraging display 06:00
Crossword Get access to over 6,000 interactive crosswords