Cork leave Waterford scalded to qualify for another Munster final

Kieran Kingston's side have too much for curiously wan Waterford 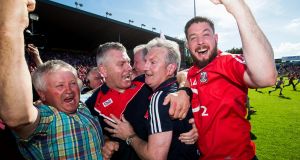 They couldn’t, could they? They won’t, will they? Cork, like. Dear old Cork. Written off, laughed up, dismissed for however long you fancy. The sleeping habits of the Ayatollah and all that. That Cork.

That Cork will, at worst, be in the last six of the All-Ireland. At least one of Tipperary, Kilkenny and Waterford will not. On the basis that nobody would have predicted that even a month ago, we’ll have to walk easy around any big pronouncements on where they might end up.

Put it this way. They will be cowed by nobody. The day may well come when they get manacled, when a bigger team brings shock and awe and leaves them in vapours. But on the evidence of their Munster campaign so far, Cork will keep coming. If nothing else, they’re never less than pleasingly ballsy.

Under a hay-baler’s sun, they beat Waterford 0-23 to 1-15 in front of 33,163 punters in Thurles. It felt like they were worth a fair chunk more, in truth. Stephen O’Keeffe pulled off impossible saves from Alan Cadogan and Seamus Harnedy in the first half to keep Waterford alive but it was temporary and brief. Cork never blew them away but never looked in trouble either.

For Waterford, this was a curiously wan return to the intercounty scene after three months since their league ended. Other than O’Keeffe, only Noel Connors and Jamie Barron made a positive impression on the game. They carried a pretty limited goal threat, with crossfield balls to Maurice Shanahan 30 yards from goal their main tactic. Austin Gleeson flashed into the game with two scintillating points early in both halves but was otherwise a dead loss, substituted before the end.

“No complaints,” said Derek McGrath afterwards. “I thought we were lucky to be in it at half-time. Stephen O’Keeffe kept us in it in the first half with a couple of brilliant saves. It’s disappointing from our point of view that everything we planned to do, we didn’t do. We were conventional and it didn’t suit us.

“Cork had bodies back and they broke at pace. We were more open than we would be normally. That probably came from Tadhg [De Búrca] picking up Conor Lehane on the puck-outs, we were being dragged around. We didn’t do what we were supposed to and the management were probably culpable there. I just felt we were chasing the game. They were full value for it.”

That was the thing. This stayed a live contest long after it felt like Cork had taken control of it. The heat was chronic down on the pitch, making the rat-a-tat swapping of points in the opening quarter even more impressive. Gleeson’s pick-up and strike on 10 minutes will outlive us all, Conor Lehane’s reply on the run five minutes later was just glorious.

For Cork, it was the older guard who carried them through the day. Of their new breed, all so impressive against Tipperary, only Mark Coleman doubled down here. Instead, this was a victory driven by Harnedy, Lehane, Patrick Horgan and Mark Ellis. As a group, they’ve had to eat some scathing verdicts over the years. This one goes on the other side of the ledger.

After going in level at 0-10 to 0-10 at half-time, Cork eased clear in the third quarter. Waterford were having to work harder for their scores and, with 16 wides across the afternoon, weren’t particularly shining in that work. And yet McGrath’s side hung on in there, drawing level again when Shanahan rode his luck to scuttle in a goal on 46 minutes.

Cork didn’t bend. Having scored the next two points after Seamie Callanan’s goal for Tipperary last month, they responded to Shanahan’s with the next three here. Horgan was money on the frees all day and he nailed one a minute after the goal. Lehane landed one from midfield after Bill Cooper emptied Kevin Moran with a shoulder, Cadogan skipped in for another.

Waterford visibly shrunk from there. Pauric Mahony was unusually shoddy in front of the posts, Moran was anonymous, both Bennett brothers were called to the bench by the 54th minute. Cork hurled them out the gate and into Monday week’s shark-infested qualifier draw without a backward glance.

“I wouldn’t lose the run of myself,” said Cork selector Pat Hartnett afterwards. “Clare are a very good team. But in saying that, two wins is good and there’s work to do in areas too. We had a certain number of wides and missed three good goal chances so we’d at least expect to get one if not two of those.

“It’s important to acknowledge the performance, the effort they put in and the calmness at half-time. I thought that in the Tipperary game too and there’s a belief in their own ability all created through training and actually doing it, not talking about it.”

It’s carried them this far. Where it ends is increasingly in their own hands.