Daniel Flynn and Cathal McNally lead the way for Kildare

Cian O'Neill's side were far superior, with their full-forward line scoring 2-9 from play. 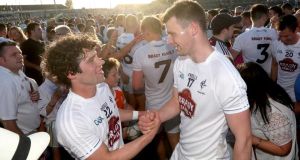 Dangerous times for Kildare, if Kildare they be. Through to a Leinster final for the first time since 2009, they were so dominant against Meath on Saturday night that the next few weeks can only come with ladles of flattery slathered all over them. If history is any judge, it will prove a deception. That would be the Kildare thing to do.

Unfair as that might be on such a young group of players, it’s the burden they carry from down the generations. You could sense it at times in the 12,702 crowd in Tullamore, never more so than when their otherwise excellent midfielder Kevin Feely missed a kickable free soon after half-time.

Kildare were nine ahead at the time but as soon as the umpire stretched his arms wide, a ripple went through the stands and terraces. It’s Kildare, after all. No better buachaillí to give a sucker an even break.

But even though Meath rattled off the next four points on the spin, Cian O’Neill’s side gathered themselves sufficiently to never allow this turn into a serious contest. Maybe they’re a new Kildare after all, capable of going about their inter-county careers unshackled from the ghosts of Kildare teams past. We’ll see.

They were terrific at times here. Anyone who watched them lose the O’Byrne Cup semi-final to Dublin’s third string back on January 22nd couldn’t have found it plausible that 17 of the players who saw game-time that day in Newbridge would be hopping off the ground to steamroll Meath in a Leinster semi-final.

But apart from the recently repatriated Paddy Brophy, all their best performers on Saturday night featured back in January too. They have grown through the season, clearly. Mick O’Grady and David Hyland are sticky at the back, Hyland’s velcro job on Graham Reilly seeing the Meath captain substituted with 15 minutes to go. Ollie Lyons and Keith Cribbin push on with relentless zeal; Eoin Doyle, Tommy Moolick and Feely are a teak triangle around the middle.

Up front, their shooting wasn’t all it could be - or all it will need to be in the final - but they still found 2-9 from play in their full-forward line. Daniel Flynn roved in and out with menace, Brophy was dynamic and McNally was ruthless, especially early on. He had 1-3 scored by the 18th minute and already the game was moving out of Meath’s reach.

One thing they will not be handed against Dublin - and yes, we’re presuming it will be Dublin; cranky Tweets to the usual address - is a kicker in the opposition goal as helpful to their cause as Paddy O’Rourke was here. Kildare had seven marks over the course of the game, four on their own kick-out and three on Meath’s. Stephen Cluxton would rather take the stage at an open mic stand-up night than give Feely and Moolick the chance to put up those kind of numbers in the final.

We weren’t good enough. We were beaten in most areas of the pitch

O’Rourke’s night was in keeping with that of most of his teammates. Meath were fairly wretched. Cleaned out at midfield, unobtrusive at the back (with the honourable exception of Mickey Burke who kept Niall Kelly in chains for the night) and impotent in attack. They went in at the break 1-10 to 0-4 behind and only for the fact that Kildare had kicked nine wides and dropped two short, it would have been plenty worse.

Meath raised a brief gallop after that missed Feely free, with Donal Lenihan and substitute Ruairí ó Coileáin banging over a couple of smart points each. But this was never truly in doubt. Flynn capped a man of the match display with a palmed goal after a David Slattery run on the hour and Kildare were out the gap.

“I think, if we perform as well as we can, we can put it up to any team in the country,” O’Neill said afterwards. “But that means doing it for 75 minutes. That’s what the best teams do. Those crackers with Dublin and Mayo, Dublin and Kerry in the semi-finals, they were 75 minute matches, they never dropped for that period.

“And we haven’t showed that, even today. There was a 10-12 minute period when Meath really got on top of us. That won’t work against Dublin, or a Kerry or a Mayo, but I think that, if we really continue to improve and develop, we can be competitive. And, any one day, we’ve seen it in the last few weeks, there could be a shock there. So I’m all for shocks.”