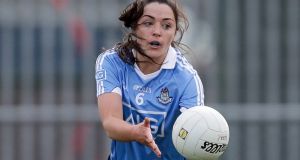 Is Sinead Goldrick letting down Dublin because she wants to take an opportunity to see if she can cut in a professional sports environment? Should we force her to choose? Absolutely not on both counts. Photograph: Laszlo Geczo/Inpho

The women’s AFL (AFLW) was founded in 2017 so Australians “stealing” our players is only a recent topic for the LGFA. There wasn’t a lot of noise about it until Cora Staunton took a punt on life in Australia. Heading into the 2020 season, there will be 18 Irish players playing in the AFLW, including four Mayo and two Dublin players.

Mayo manager Peter Leahy was clear in his criticism. The LGFA is under threat from AFLW and while he would never stop a player from going he suggested that the LGFA should “protect our own” and enforce a rule that anyone who played in the AFLW season (which currently runs from February to April) could not return and play for their county in the Championship.

Leahy’s frustration with four key players being absent for pre-season and the National League is understandable but the rationale behind the solution does not add up if the goal is “protecting your own”. Forcing players to choose between playing for their county and experiencing life as a professional sports person in Australia for six months is not motivated by what is good for the player but rather by fear that we, the LGFA, are not good enough to keep them.

One of the most powerful assets of the GAA is that it is built on a loyalty to community and an unrivalled pride of place. This wonderful aspect can, however, be destructive in some contexts. What happens when players are subtly guilted into doing things that they don’t want to do? When pressure is put on players to make choices between loyalty and commitment to themselves versus their club or county? This happens at club and county level, and more often than not coaches don’t even know they are doing it. We are an amateur organisation and we have no ownership over players, they must only play because they want to.

Delivering LGFA coach education courses, there is a recurring conversation. Coaches lamenting the fact that their players have too many other commitments between other sports, school or college and their social life. Is this not the sign of a well-rounded young woman? Even though there is a lot of evidence that great athletes play a variety of sports when they are young, many of our coaches still encourage players to choose Gaelic over everything else. What is this motivated by, what’s best for the player or what’s best for the coach?

Leahy rightly pointed out that intercounty players have access to professional supports in terms of physiotherapy, strength and conditioning and nutrition. There is professional sports science support employed, the coaches and players bring a professional mindset to everything they do. I do not argue with this but we are missing the most important point. The players do not have the daily lifestyle of a professional sportsperson.

The GAA are making a conscious decision to maintain the amateur status of the organisation, we like that part of the organisation, there is something wonderful about it. However, from a sports performance and training point of view that results in a trade-off for coaches and players who are trying to perform to the highest level that their potential allows.

Training practices seen in professional sport cannot be directly applied in a GAA setting, not due to player or coaches’ ability but simply due to time. In a professional setting players will have more time each day. Players could have 8am - 4pm for an activation session, a strength session, a technical agility and ball skills session and a full games-based tactical and technical session. In any GAA code, we are often trying to tick all those boxes from 6.45 - 9pm in the evening. While the commitment and mindset of both sets of players might be the same, there is no way that they can be practically trained in the same manner.

Mick Bohan alluded to the potential difference between the LGFA and AFLW environment. Sinead Goldrick was managing an ongoing tendinopathy during the 2019 season. Since going to Australia she is now playing without pain.

This doesn’t mean that the support she was getting in 2019 wasn’t professional but it could mean that her new lifestyle is allowing her to look after her body to an even better level so that she can deal with the high training and playing requirements of an elite level athlete. Is she letting down her county because she wants to take an opportunity to see if she can cut it in a professional sports environment? Should we force her to choose? Absolutely not on both counts.

The LGFA is developing well-rounded field sports players, it is no surprise that they are on the radar of a talent transfer structure such as this. The momentum that has gathered behind players going to the AFLW could potentially burn itself out. The AFLW began in 2017, as Australian players grow up with the game it will be harder for Irish players to catch up with them. Yes, a few exceptional players will make it but as is often the case with talent transfer players, the main result of their presence may be to ruffle the feathers and draw out the best in Australian players and bring something new to the training environment.

AFLW is not the biggest threat to women’s football. If we want to raise the standard of our intercounty game then the structure that transitions players from 17- and 18-year-olds to senior intercounty players needs improving.

When a player finishes at minor level and doesn’t immediately make the senior team, is that it, is it over for her? How can we keep her in a system that will coach her to develop the physical, technical and tactical capacities the game demands and the mental and emotional characteristics to manage the rigours of training and playing at intercounty level? The number of players that leak out of our intercounty player pathway every year is far greater than the 18 that will miss six months of training because they are playing in the AFLW.