The Backdoor: Time to take a stand as Antrim remain homeless

There’s more to the summer than Munster, for starters there’s the Leinster hurling 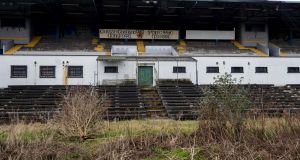 It’s been all about Munster, Leinster just a mezzanine in the shadows – above Joe McDonagh though not quite hitting the heights of its southern equivalent.

And while Saturday’s precursor to the Leinster final was entertaining it was hardly the most riveting game of the summer thus far; yet it’s the imperfections that makes the next instalment so highly anticipated.

Kilkenny haven’t won the provincial title since 2016, an unthinkable eternity on Noreside, while Davy continues to try and break his duck across the border, Wexford having not won the title since 2004.

Moreover, Davy Fitzgerald and Brian Cody haven’t shared a sideline in a major final since the nascent stages of the Clare man’s career – the 2008 All-Ireland final. Enter Cody’s head and see how he feels about losing in these circumstances – to the Banner pretender of all people. Similarly, at your own risk, enter Davy’s head?

At times Saturday’s encounter in Wexford may have lacked in terms of flair, but it never lacked for heat. That nothing spontaneously caught fire within the feverish inferno of Wexford Park was nothing short of miraculous. And now, it’s all set to intensify.

Munster may have its elegance and name and flamboyance, but it doesn’t have the Leinster primeval passion, best illustrated by the sides set to duel again at Croke Park. And the room for improvement is immense.

Not only have Wexford won only a single game this summer – against the relegated Carlow – they have struggled to hit the scoring tallies required to be considered genuine All-Ireland contenders. Kilkenny, meanwhile, need TJ Reid to return with that panache and to reverse last Saturday’s trend with Matthew O’Hanlon who, along with Yellow Belly defence, made Cody’s chief panther bear the uncharacteristic hallmarks of a helpless kitten, clinging to him like an unkindness of bloodthirsty ravens.

So much scope for improvement; so much to anticipate.

Yes, there’s more to the summer than Munster.

By the numbers: 52 - Scoring difference between Munster final- bound Limerick and championship- exiting Clare after both sides finished the Munster championship round-robin on four points.

Shame on Stormont, and Leinster House, and Croke Park, and that wicked Fourth Estate - so the blame has been tossed around like a self-serving game of Hot Potato, all the while Antrim remain homeless.

As Kildare arrive in Ulster this weekend, Casement Park wouldn’t look out of place in the Chernobyl exclusion zone, so many memories linger and yet that’s all there is – mere history. The county’s teams meanwhile roam the glens, without a home, without a fortress and, most significant of all, without that sense of belonging.

At whose feet do we place the blame? Truthfully, it’s difficult to be definitive, though there’s more than enough of it to go around. There are introspective questions that must be asked here, the most pertinent one being: Have “we” done enough to deliver the people of Belfast, the second largest city on the island, a stadium to be proud of? Few, sadly, can say they have.

And so the Saffrons pull the wagon into Corrigan Park on Saturday, not knowing when – or indeed if – they will receive a new permanent home.

Ulster, as a tribe, haven’t been averse to making political statements and staging protests when needed, when the pleading has been funnelled into a vacuum and silenced.

Time to perhaps take another stand.

Quote of the week: “Everyone else seems to have a voice on this, except managers, and that’s an issue too.” – Carlow manager Turlough O’Brien remains strongly opposed to a Tier 2 championship, while noting the miniscule opposition to it.

In his weekly column on these pages Darragh Ó Sé put it succinctly: Galway were “too stuck in systems, too rigid and too defensive.” But Roscommon too had been in a state of stasis.

Not to worry, the Connacht final brought the perfect opportunity to break through the ceiling. For all their growth in recent seasons, Roscommon were thought of as inferior to their provincial rivals; Galway, relentless in their defensive approach, were consistent and that was about it – a safe bet to avoid a major upset.

Their opponents, meanwhile, took a sledgehammer to theirs’, and they can finally begin thinking of bigger things, perhaps going deeper into the summer than their provincial rivals. Imagine it.

For Galway, it’s more head-scratching and chin-stroking. The potential is there, but it has been locked up in conservatism for so long that time is required to set it free. Achieve that and creative players, like Walsh and Burke and Flynn, can finally earn their place in that famous maroon lineage, with Purcell and Donnellan and Joyce for company.

But the road back is a long one.